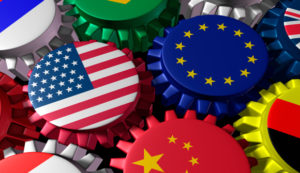 Donald Trump decided this week to rough up a PBS reporter, Yamiche Alcindor, who sought to ask him whether his declaration that he is a “nationalist” was a “dog whistle” to those who are closet “white nationalists.”

He called the question “racist,” an odd accusation given that Alcindor is African-American.

Setting that stuff aside, it’s fair to wonder whether the president’s nationalistic view is code as well for “isolationist.” Yes, I share the view that the nationalism espoused by Trump can be construed as an endorsement of white nationalism, but the isolationist tag is equally dangerous on another level.

Trump wants to “put America first.” His nationalist tendencies, though, ignore the reality of the present day. The world has figurately shrunk, thanks to technology and a 24/7 awareness of everything that happens on the other side of Planet Earth. Thus, we cannot recuse ourselves from the affairs in faraway lands. Nor can they from our affairs.

We build alliances because we seek to stay engaged in world affairs. The president seems intent on pulling us out of the cooperative efforts that his predecessors have forged with trading partners, military allies and geopolitical friends.

Trump imposes trade tariffs because he accuses our partners — namely Canada and Mexico — of being “unfair” in their trading practices. He goes to Europe and scolds NATO allies for failing to pay their fair share of their defense; in the most ironic tongue-lashing of all, he tears into Germany for its deal to import natural gas from Russia, suggesting that the Germans were beholden to the Russians. Shortly after taking office, Trump managed to hang up on Australian Prime Minister Malcolm Turnbull because of a spat he didn’t understand over refugee migration.

This is how putting “America first” makes us stronger? This is how to build American prestige around the world?

No. It isn’t. Our retreat from a global strategy weakens this country as its standing among the world community of nations diminishes.

I don’t want the president to continue on this course. I know he won’t give a damn what I think, or what other critics think about him and his policies. If only he could enlist the wisdom of those closer to him to speak the truth to him about the folly of his nationalism.