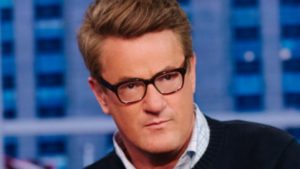 Joe Scarborough has gone through an interesting evolution since when he was a young member of Congress from Florida.

He was a conservative Republican who once voted to impeach President Clinton. Then he left public office in 2001 and has pursued a career as a cable news host and commentator.

Now he is one of Donald J. Trump’s most reviled critics. He has left the Republican Party; he’s engaged to be married to his MSNBC “Morning Joe” co-host, Mika Brzezinski.

He said this week that had Democratic presidents, such as Barack Obama or Bill Clinton, “slandered” the FBI the way Trump has done, conservatives would mount a virtual all-out rebellion against either of them. They would give Obama or Clinton “holy hell” for saying the things Trump has said.

He now accuses the GOP of being “accomplices with their silence” about the president’s harsh criticism of the FBI.

Indeed, there once was a time when Americans hardly ever heard Republicans say things out loud that one could construe as critical of law enforcement. Indeed, the GOP was often considered to be the “law and order” party.

Those days are gone. The roles seem reversed, with Democrats now standing solidly behind the FBI as it seeks to do its job.

So, too, is Joe Scarborough, the one-time Republican who’s had enough of his former political party and its leader, the president of the United States.

Welcome to the club, Joe.

One thought on “This former GOP rep has, um, ‘evolved’”