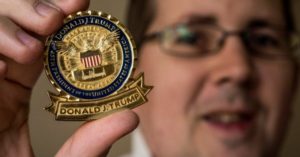 Donald Trump has infused politics into a presidential tradition.

The president has allowed the issuance of a new “Challenge Coin” that normally contained a presidential seal and the national motto, “E Pluribus Unum,” which, of course, is Latin that translates to “Out of many, one.”

This time the coin, which presidents have handed out as keepsakes over many decades, contains the phrase “Make America Great Again.” Yep, the president has memorialized a campaign slogan onto this formerly time-honored tradition.

As The Hill reported: “The commemorative coins stem from the military tradition of exchanging coins covertly through a handshake. Presidents give them to troops, visitors and other members of the public. The coins have become collector’s items, and are sometimes sold for hundreds of dollars.”

OK, but are they meant to continue a president’s campaign theme? Are they intended to remind us of a slogan the president used to win election?