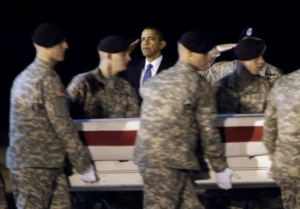 The president of the United States has zero political instincts when it comes to the decorum of his high office.

Consider what he’s now doing to politicize the deaths of fallen American warriors. Donald John Trump has declared falsely that previous presidents haven’t bothered to send letters to Gold Star families, or to call them, or offer a nation’s gratitude.

His latest epic lie has drawn strong responses from the three men who preceded him immediately in the office: Bill Clinton, George W. Bush and Barack Obama. Aides for all three men have condemned the president’s specious claim that their bosses didn’t do what Trump has said he has done.

Good grief! Can this man ever find a way to conduct himself with a semblance of dignity? Can he ever learn how decorum matters as it involves the presidency of the United States of America?

To make matters worse, if that’s possible, he decided to drag the memory of White House chief of staff John Kelly into this atrocious dispute. The president wondered on Fox News Rado if President Obama ever called Kelly when his son died in battle. According to The Associated Press:

Then Trump stirred things further Tuesday on Fox News Radio, saying, “You could ask General Kelly, did he get a call from Obama?”
John Kelly, a Marine general under Obama, is Trump’s chief of staff. His son, Marine 2nd Lt. Robert Kelly, was killed in Afghanistan in 2010. John Kelly was not seen at Trump’s public events Tuesday.

John Kelly reportedly sought to keep his son’s memory out of the current political dispute. The president, of course, demonstrated his tin ear and blabbed out loud about Lt. Kelly’s death anyway.