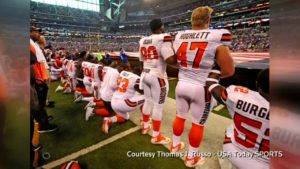 Now that the nation has become full of “experts” on how to respect Old Glory, I want to make a plea to my fellow Americans.

Yes, many of us have become engulfed in this controversy over on-the-field protests by professional football players. The president of the United States has yanked the discussion away from its origin: the treatment of some police officers of African-Americans. It’s now become a matter of huge concern over whether those protests disrespect the U.S. Constitution and the Stars and Stripes.

The players kneel quietly, peacefully while bowing their heads during the playing of “The Star-Spangled Banner.” Why, that’s just damn disrespectful, according to Donald Trump and many millions of other Americans. I’ll say once again that this form of protest isn’t much to my liking, either, but I seek to respect the players’ right to do what they’re doing.

The next time you’re at a public event where they play the National Anthem, be sure to remind the fellow who wears his hat while the song is being played to take it off. Don’t forget to tell the individual who’s playing with his or her cell phone to put the device away. Instruct anyone you see or hear talking, laughing or cutting up while the anthem is being played to be quiet and to pay attention.

Be sure y’all stand at attention, quietly. Look directly at the flag. You are welcome to place your hand over your heart. You also are more than welcome to sing the words of the National Anthem as it’s being played.

If you don’t want to correct your fellow Americans, then just take note of the number of them you see disrespecting the flag.

Then remember what you see when you criticize an athlete who’s trying to make a political statement that has nothing to do with the flag, or the anthem, or the Constitution.