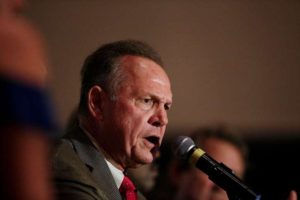 The buzz around political circles is that Republican Party “insurgents” are set to declare civil war against the party “establishment” in their effort to elect Roy Moore of Alabama to the U.S. Senate.

Good luck with that one, folks.

Civil war? Is it really going to happen?

Moore is no friend of the GOP higher-ups. He savaged Senate Majority Leader Mitch McConnell while defeating Strange, who by the way did the same thing. Both men sidled up to Donald Trump, who endorsed Strange.

Moore is a renegade, to be sure. He thinks gay people should be made criminals. He was twice removed as Alabama Supreme Court chief justice because (a) he installed and refused to remove a Ten Commandments monument on public property and (b) refused to honor a U.S. Supreme Court ruling that declared that gay marriage is legal in this country.

Now he’s gotten the support of former Trump senior strategist Steve Bannon, who’s back in charge of Breitbart News. Bannon is sounding the bugle to launch the civil war against that GOP establishment.

Bannon is old enough to remember the last time a major political party — the Democrats — engaged in such an internal conflict. It erupted in 1968 and continued through the 1972 presidential election. The Vietnam War divided Democrats. It was Hawks vs. Doves. The fight tore at the nation’s soul, as did the war itself.

Democrats lost the White House in 1968 and then got obliterated in 1972. The major recuperative factor that enabled the Democrats to regain the White House occurred when the Watergate break-in and subsequent presidential cover-up doomed President Nixon. They won the 1976 election, then got clobbered in 1980 and 1984. Oh, and let’s not forget about the primary battle that erupted in 1980 when Sen. Ted Kennedy challenged President Carter.