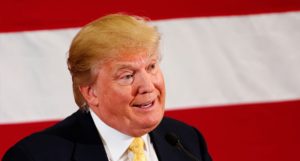 Donald John Trump’s election as president of the United States was unprecedented at many levels.

He had never held public office; he was a TV celebrity and real estate mogul who slapped his name on seemingly every high-rise being built in the past two decades; he’s been married three times and has bragged about his infidelities.

But he’s the man. Now we hear plenty of chatter out here in the peanut gallery about other first-time pols — who also happen to be celebrities — pondering whether they want to run for the presidency.

Spare me! Spare the country! Please say we aren’t about to get more of this ridiculousness.

Kanye West has said something about running in 2020.

Oh, how about Mark Zuckerberg, the founder of Facebook? This youngster isn’t even old enough to run for the office  — but he will be by the time 2020 rolls around. He, too, has gotten a mention by some of the TV talking heads.

I’m a bit old-fashioned in this regard. I happen to think experience with government and politics is a valuable commodity on which to run for the highest office in the land. I also like the notion of politicians having a record of public service to reveal to the public whose votes they would be seeking.

Trump didn’t bring any of that to the 2016 presidential campaign. I guess he was blessed to be running against Hillary Rodham Clinton who, it turns out, became a terrible candidate. The irony in all of this is that the “smart money” thought the tables would have been turned, that Hillary had been “blessed” with getting to run against someone so patently unqualified and unfit for the office that he ended up winning.

Trump is now the president and his presence on the world stage is creating a bit of buzz out in the land of other celebrities with no qualifications for the presidency; they, too might decide to become candidates.

Say it ain’t so. Someone. Please.