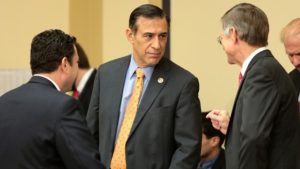 U.S. Rep. Darrell Issa is getting a bit testy, or so it appears.

A reporter asked the veteran California Republican lawmaker how he intended to vote on a bill to repeal the Affordable Care Act and replace it with some sort of Republican-sponsored alternative.

Issa responded, “It’s none of your business.” The reporter then responded with a question about Issa’s constituents. Don’t they need to know? “You’re not a constituent,” Issa replied.

OK. Let’s settle down for a second or two.

Rep. Issa is a member of Congress. He is one of 435 members of the House. This body writes federal law. It then enacts those laws, which then get approved by the Senate and gets signed by the president.

Thus, we’re all his constituents, if you get my drift.

Rep. Issa, you need to get a grip, sir. Reporters asking you for your opinion on an important piece of federal legislation is everyone’s business.

Issa has no special privilege to keep his views on these critical matters to himself.