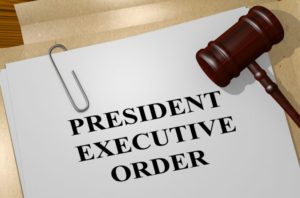 I recall hearing time and again during the 2016 presidential campaign that Barack H. Obama’s use of executive authority was somehow a bad thing.

The president shouldn’t govern by executive fiat, said many of his critics, such as the Republican nominee for president, Donald John Trump.

Trump is now the president. He’s assumed the role of chief executive of the federal government. By golly, the man has found that executive authority isn’t such a bad thing after all.

Indeed, as that supposedly “phony” 100-day threshold approaches, the current president is left to proclaim the only victories of his new term have come via executive order.

Oh, and he’s also suffered some embarrassment through this activity as well, such as when the federal judiciary knocked down two of his travel bans for those coming here from Muslim-majority countries.

Through executive authority, Trump is demonstrating his ability to use the power granted to him by virtue of his election. I get that. I respect the authority granted to the president and I won’t condemn him for using it, per se.

What boggles my mind is how he continues to get away with the rhetorical gymnastics he performs routinely and how he manages to bluster his way out of what he said earlier.

He said while campaigning he wouldn’t have time for golf; he said would be at the White House 24/7 working to bring back all those jobs that have gone offshore; he promised to repeal the Affordable Care Act and replace it with something else.

He’s done essentially two things during his first 100 days as president: He nominated a Supreme Court justice, who was confirmed by the U.S. Senate and he ordered a missile strike against Syrian military targets in response to Syrians’ use of chemical weapons against civilians.

Legislative accomplishment? Nothing, man. The president has relied almost exclusively on his executive authority — which he condemned when another president did the same thing.