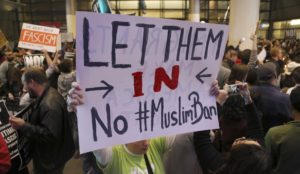 The nation’s founders were wise men. They didn’t craft a perfect governing document, but they got it mostly right.

They established the seven Articles within the U.S. Constitution, then set about to fine-tune it, tinkering with amendments, the first 10 of which guaranteed certain civil liberties to the citizens of the day.

The First Amendment is under discussion today as the nation ponders this idiotic idea by the current president to ban refugees from six Muslim countries.

Two federal judges have suspended the new rule on the grounds that it violates the Establishment Clause set forth in the very first amendment.

Interesting, yes? I think so. Here’s why.

The First Amendment protects three civil liberties: religion, the press and the right to assemble peaceably. It’s fascinating in the extreme to me that the founders constructed the First Amendment to prohibit the enactment of laws “respecting an establishment of religion, or prohibiting the free exercise thereof … ” Of the three liberties outlined, the founders listed religion first.

Donald J. Trump’s Muslim Ban 2.0 does essentially the same thing  — with a few modifications — as the first executive order that a federal judge struck down. It targets Muslims, discriminating against them as they seek to enter the United States.

Sure, the president insists he seeks only to protect Americans against terrorists.

Three federal judges, though, have said violating the Establishment Cause is illegal. Judges in Washington state, Hawaii and Maryland have concurred that such an order is discriminatory on its face.

No can do, Mr. President.

Therein perhaps lies the beauty of our form of government, the one crafted by the founders who knew the value of restricting the power of the executive branch. They did it by parceling out power equally to the legislative and, yes, the judicial branches of government. They allowed for lifetime appointments of federal judges ostensibly to liberate them from political pressure and to enable them to interpret the Constitution freely.

The judicial branch has exerted its rightful authority yet again. It did not commit, as the president said, an “unprecedented overreach” of judicial power.

It has recognized the importance of the Establishment Clause in the First Amendment, understanding that the founders thought enough of that clause and the contents of that amendment to enact it first.