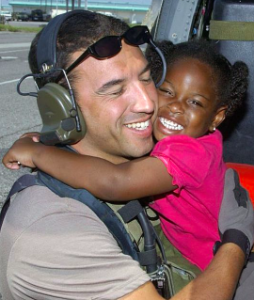 Consider this item to be the “gift that keeps on giving.”

It involves a teenage girl from Mississippi and a U.S. Air Force pararescue jumper who became acquainted at a time of intense national tragedy: Hurricane Katrina.

LaShay Brown was struggling to escape Katrina’s wrath in New Orleans in September 2005. Airman Michael Maroney rescued her from the torrent. The picture of them embracing after the rescue went viral.

They reconnected a decade or so later. They have remained BFFs ever since that reunion.

LaShay is now 14 years of age; Maroney is set to retire from the Air Force. But they have a date to keep. LaShay has invited the man who saved her life to her junior ROTC ball in Waveland, Miss., where she now lives with her family.

Maroney says LaShay saved his life too. Her embrace of him that day meant the world to the young airman.

The above link is of a blog I posted in 2015 of the two getting reconnected. It warmed my heart then to read of the initial rescue and of Maroney’s efforts to catch up with the little girl he pulled from Katrina’s wrath.

The idea that he now would be the girl’s “date” at an ROTC ball warms my ticker even more.

Hearing of this upcoming event makes my day.