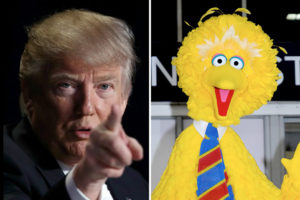 The president of the United States has just gored my ox. He has hit me where it hurts. He has taken aim at a government institution I revere.

Trump proposes zeroing out about $445 million for CPB and NPR. Wiping it out. No more public money for public broadcasting, either radio or television.

“PBS and our nearly 350 member stations, along with our viewers, continue to remind Congress of our strong support among Republican and Democratic voters, in rural and urban areas across every region of the country,” PBS president and CEO Paula Kerger said in a statement.

“We have always had support from both parties in Congress, and will again make clear what the public receives in return for federal funding for public broadcasting,” Kerger continued. “The cost of public broadcasting is small, only $1.35 per citizen per year, and the benefits are tangible: increasing school readiness for kids 2-8, support for teachers and homeschoolers, lifelong learning, public safety communications and civil discourse.”

So, with that the president wants to eliminate an element of public spending that in the grand scheme amounts to tossing a BB into the ocean, but which brings tangible benefit for millions of Americans.

I have a dog in this particular fight … more or less.

Not long after I left my job in print journalism in the late summer of 2012, I signed on as a freelance blogger for Panhandle PBS, the organization formerly known around the Panhandle as KACV-TV, based at Amarillo College. I wrote about public affairs television. My text was published on Panhandle PBS’s website.

I got great satisfaction writing the blog and I enjoyed my relationship with the public TV station immensely. It ended when the station went through some changes and decided to divert its “resources” toward more on-air production of local programming.

We bid each other adieu. However, I continue to love PBS and what it brings to the quality of life of all Americans, especially to those of us in the Texas Panhandle. Its programming features some first-rate, top-drawer, high-level production. Ken Burns’s documentary series on the Dust Bowl — and its impact on the High Plains region — will remain with me for as long as I draw breath.

I would hate with every fiber of my being seeing the government remove itself from that kind of programming.

And for what purpose? So we can buy more bombs, missiles and other weapons of war — as if we don’t have enough of it already to destroy Planet Earth a billion times over.

Am I angry over this budget proposal? You’re damn right I am!

Do not do this, Mr. President and Congress.