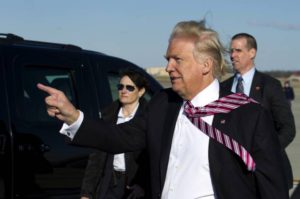 Some congressional Republicans have joined their Democratic colleagues in seeking the tax returns of the president of the United States.

Go figure. It seems that some GOP members want Donald J. Trump to disclose once and for all whether he has any business dealings in Russia or has any other kind of relationship with Russian government officials.

The president keeps telling us he doesn’t. He keeps saying it with increasing exasperation. Does he really and truly expect skeptics out here — even in Flyover Trump Country — to take him solely at his word?

The president has broken with tradition set four decades ago in the wake of the Watergate scandal. Every president since that dark time has released his tax returns. Trump has refused.

Meanwhile all these questions about Russia keep swirling around the president and the White House, around his national security team and now, apparently, around the attorney general of the United States.

Will there be other congressional Republicans who’ll join this chorus? Perhaps. If they do, will the president finally come clean? I have less faith in that happening.

This never has been a matter of nosy Americans wanting to know if Donald Trump is as rich as he says he is. It’s now a matter of urgent national security.