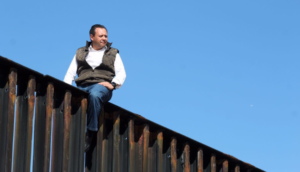 A member of Mexico’s congress has performed a masterful publicity stunt that illustrates something quite nicely about Donald J. Trump’s desire to build a “beautiful wall” along the U.S.-Mexico border.

Braulio Guerra climbed a portion of the wall that’s already been erected. He sat atop it and then boasted about how easy it was to scale it.

He sat 30 feet above the ground.

Hmmm. How does he do that?

The congressman’s point is a valid one. It is that anyone who wants to scale a wall, or tunnel beneath it will find a way. A wall doesn’t protect us any better than what U.S. Border Patrol and local law enforcement agencies already are doing to ensure our nation’s safety.

In a video he distributed, the congressman said, “It would be simple for me to jump into the United States, which shows that it is unnecessary and totally absurd to build a wall.”

I won’t belabor the point that walling us off from our neighbors is patently in-American on its face. Yet the president of the United States keeps insisting that we’re being inundated with criminals of all stripes who are invading the United States for the sole purpose of preying on Americans.

My wife and I recently visited the border region and witnessed up close a tiny part of what the Border Patrol is doing to protect Americans. Officers are stopping every northbound vehicle at points along the Rio Grande Valley. They quizzed us briefly about our destination, then sent us on our way.

Did they stop anyone? Yes. We witnessed them pulling a motorist over, presumably for more, shall we say, “extreme vetting.”

Can we stop every single illegal immigrant from sneaking into this country? No. We’ve never been able to stop all of them.

A wall won’t do it, either.