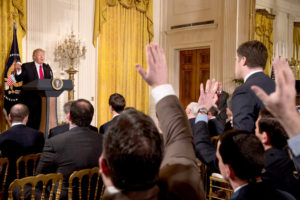 I found myself somewhat amazed as I read a story in the Sunday New York Times about Donald J. Trump’s apparent inability to get his administration fully staffed.

The article talked about Trump’s insistence on loyalty. Those who say negative things about The Boss are fired; those who fall into that category are disregarded as potential new hires.

I totally understand the president’s desire to have loyal team members on board. The head of our government is entitled to insist that his lieutenants follow the policies set at the top.

Still, Trump crowed this past week about the “fine-tuned machine” that is his presidential administration. Except that he hasn’t hired a whole lot of assistant secretaries or deputy secretaries to assist his Cabinet picks.

But here is where the amazement kicks in.

Loyalty hasn’t been Trump’s No. 1 requirement in filling at least two Cabinet places.

Can you say “Ben Carson” and “Rick Perry”?

Carson is the housing secretary who ran against Trump in the 2016 Republican Party presidential primary. He and Trump clashed openly at times on the campaign trail and on debate stages across the country. I recall Dr. Carson saying some pretty harsh things about the president-to-be as his own campaign went down in flames.

But then there’s former Texas Gov. Perry, another former GOP foe. It was Gov. Perry who called Trump a “cancer on conservatism.” He’s now slated to become secretary of energy.

The Times reports, though, that Trump or his senior advisers are nixing appointments because of what individuals have said about the president. Meanwhile, all these posts remain vacant, their offices are dark and top-level administration officials are being denied the kind of help they need in carrying out Trump administration policies — whatever the hell they are.

I love this passage from the Times story: “It is not just Secretary of State Rex W. Tillerson who has no deputy secretary, much less Trump-appointed under secretaries or assistant secretaries. Neither do the heads of the Treasury Department, the Education Department or any of the other cabinet departments. Only three of 15 nominees have been named for deputy secretary positions. Defense Secretary Jim Mattis has a deputy only because he kept the one left over from President Barack Obama’s administration.”

This is a “fine-tuned machine”? It needs a healthy dose of WD-40.