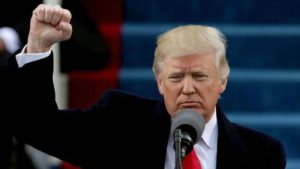 I have a message to the new president of the United States, if only he receives it.

The campaign is over, Donald John Trump. You won. You’re the president. You promised to unify the country. You could have started when you delivered the inaugural speech. Sadly — in my mind — you didn’t.

What the country heard from the president was a recitation of the themes that won over enough voters to elect him president.

He painted yet again a dark, forbidding portrait of the greatest nation the world has ever known. He talked about job losses, a dispirited military establishment, fear of radical Islamic terrorists, a general feeling that the nation has gone to hell in a hurry.

This wasn’t your typical inaugural speech. It contained little of the high-minded hope that presidents bring to their high office.

Here is the speech in its entirety. Take a look and judge for yourself:

Believe it or not, I was hoping there would be at least a glimmer of recognition of the progress that President Barack Obama made during his eight years in office: dramatic reduction in the jobless rate; revival of the auto industry; huge reduction in the annual federal budget deficit; success in the war against terrorists — including the killing of Osama bin Laden.

None of that came forward.

Interestingly as well was the lack of mention of the dreaded Affordable Care Act, which Trump has vowed to “repeal and replace.” Nor was there a mention of the Iranian nuclear deal that Obama negotiated to prevent Iran from obtaining nuclear weapons.

He talked instead of restoring jobs, bringing back manufacturing jobs. Here’s a news flash, Mr. President: Those jobs fell victim to automation, not poorly negotiated trade deals; good luck if you think manufacturers are going to forgo robots for human beings.

I’m going to wish the president well — believe it or not. If he succeeds in all that he wants, more power to him, and to the country he now leads.

Failure, as the saying goes, is not an option.

If only he could have lifted our spirits just a little bit.