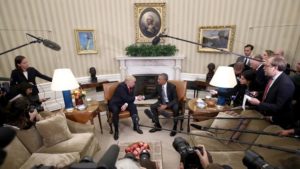 President Barack Obama pledged to do all he could to ensure a “smooth transition” to the presidency of Donald J. Trump.

Now we hear that the men are at each other’s throats. They’re sniping from lecture podiums and over social media.

Trump has been sniping at the president over his decision to forgo a U.N. Security Council veto of a resolution that condemns Israel for its construction of settlements on the West Bank. The president, meanwhile, is talking out loud about the dangers of isolating the United States from the rest of the world.

How will all of this — and more — affect the transition? No one can yet determine how the men’s staffs will work together. Indeed, that’s where the transition must occur without a hitch. Chiefs of staff need to talk constructively to each other, along with other White House staffers. National security experts need to talk candidly about the threats to the nation.

Even though I shouldn’t give a damn how this affects the two men’s personal relationship, I feel compelled to recall an anecdotal story I heard some years ago about two earlier presidents.

Harry Truman left the presidency after Dwight Eisenhower was elected in 1952. The two partisans despised each other. Truman, the Democrat, couldn’t stomach the idea that Eisenhower, the Republican, would occupy the Oval Office. They barely spoke to each other during the transition.

The men reportedly set aside their personal antipathy at the funeral of another president a decade later. President Kennedy was gunned down and Give ‘Em Hell Harry and Ike managed to patch up their personal relations as they joined the rest of the country in bidding farewell to JFK. Did they realize at that time that life, indeed, is too short to harbor grudges? Perhaps.

No one really expects Obama and Trump to become BFFs. Given the mercurial temperament that Trump exhibits — describing his meetings with Obama as “terrific” and “terrible” in the same week — one cannot predict how the president-elect is going to respond.

President Obama has spoken eloquently about the graciousness extended to him and his staff by President George W. Bush’s team in 2009. The transition from President Clinton to Bush in 2001, as we have learned, wasn’t quite so smooth with reports of keyboards missing the letter “W” and other pranks being pulled.

The stakes are much greater, of course, when rocky transitions involve heads of state instructing their staffs to undermine the other guy in this troubling and unsettled time.

Barack Obama and Donald Trump have three more weeks to put this campaign behind them. Let’s get busy, gentlemen.