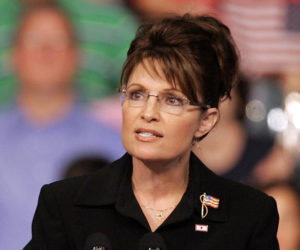 The United States should just pull out of the United Nations over the U.N. Security Council’s vote to condemn Israel over its building of settlements along the West Bank, according to Palin.

That’s it, says the one-time Alaska governor. Let’s just quit the U.N. and lose our still-powerful voice on the Security Council. Let’s just leave it to others to make decisions critical to U.S. foreign policy and internal security.

Palin’s foreign policy chops are, shall we say, limited in the extreme … which is to say she doesn’t know what she’s talking about.

Palin ran for vice president on a Republican ticket led by John McCain in 2008. After the McCain-Palin ticket got trounced by Barack Obama and Joe Biden, she quit her governorship in the middle of her first term.

Now this quitter wants the president-elect to listen to her “advice” on how to handle a vote on the Security Council? She obviously disagrees with the decision by the United States to abstain from the Israel condemnation vote, rather than veto it as we have done in the past.

Well, I disagree with the decision, too.

Does anyone — other than, say, TEA Party members of the GOP — believe we ought to pull out of the U.N. over this single vote? Give me a break.

The United States of America retains a significant voice in the international body. It shouldn’t toss it in the crapper in a fit of pique.