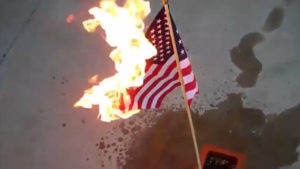 Light a match to Old Glory and go to jail and lose your citizenship.

Yeah, that’s the ticket. Never mind the constitutional guarantee that doing something so reprehensible is protected under the First Amendment’s freedom of speech clause.

The president-elect, though, ignored that fundamental truth when he blasted out a tweet that said those who do such a thing need to spend time in the slammer and forsake their citizenship as Americans.

The Washington Post and other media, though, say that Donald J. Trump is “playing to his base,” the voters who’ve stood with him through all the insults, innuendo and idiocy that have poured from his mouth.

They helped elect him president and I guess that’s his way of saying “thanks, guys.” As the Post reported: “Trump won rural America, where support of the flag is a big issue,” said Scott Reed, a longtime Republican strategist who served as Bob Dole’s campaign manager in 1996. “A lot of those homes that had Trump signs out front were also flying American flags. This is clearly part of his base politics.”

But what about the rest of the country, Mr. President-elect, that didn’t vote for you? What about those of us who are appalled by your seeming ignorance of constitutional protections and your belief — if that’s what you truly believe — that the Supreme Court got it wrong when it ruled on two occasions that burning the Stars and Stripes is protected political speech?

My wife and I fly a flag in our front yard, too, by the way.

I won’t buy into the notion that Trump isn’t my president. I didn’t vote for him, but he’ll take office in January and will assume the role of head of government and head of state. I ain’t moving anywhere. I’m staying right here in the U.S. of A. and will continue to register my gripes — more than likely quite often — over policy pronouncements that come from the president.

Trump won’t be president just for those who stood with him. He’ll be my president, too.

Thus, I hereby demand that he stop making idiotic declarations. How about taking back that crap about flag burning?