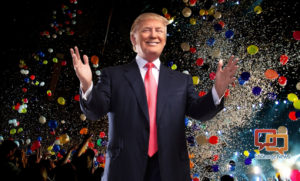 I’m hearing some troubling notions from those who voted on the losing side of a presidential election.

At the risk of sounding sanctimonious and self-righteous, I’d like to offer a rebuke to that sentiment.

I didn’t vote for him, either. I detest the notion that he is about to become the 45th president of the United States. My visceral loathing of him is deeper than anything I’ve felt for any of his predecessors.

He is my president, though.

Why? Because as president he will offer policy prescriptions that affect every American. I’m one of ’em.

I intend to fight him whenever I can through this blog. It’s my right as an American to speak my mind and to protest what my government is doing. I will do so vigorously when the moment presents itself — and so far, those moments are coming with stunning frequency.

Trump is my president, nevertheless.

Me? My inclination — no matter the outcome — has been to accept the result. I might not endorse it. Sure, I’ve swallowed hard plenty since the Nov. 8 election. I’ve done so before.

I won’t, though, accept the idea that the man who’s about to take the oath of office isn’t my president.

I detest the notion of Trump having the word “President” stated and/or written with his name. I also reserve the right to be critical — even harshly so — of my president.