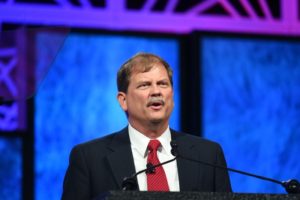 I consider Tom Mechler to be a friend. I’ve known him for about a dozen years and we have a nice relationship — even though we disagree politically on just about, oh, every single issue.

Still, I was glad to see the dedicated Panhandle Republican re-elected chairman of the Texas Republican Party this weekend. He survived an attempted coup by a fringe wing of his party that sought to topple him because he’s supposedly too friendly with LGBT elements within his party.

I’m going to take issue with something Mechler said in a statement after his re-election as party chairman had been assured.

According to the Texas Tribune, Mechler said this in a statement: “Our Party is strongest when we are united and I look forward to working each and every day to keep the RPT the most dominant state party in the country. Today the work begins to demolish the Democrats this November.”

You mean, Mr. Chairman, that you’re going to wipe them off the face of the state map?

By my way of thinking, the Texas Democratic Party already is demolished. Good grief, dude. You guys occupy every statewide office there is. Democrats can’t field a credible challenge in any of them.

Has the chairman really considered just how dominant his party is these days?

I’ve long been a supporter of a strong two-party state. Before you accuse me of wanting to see Democrats come back, I assure you that I’ve said the same thing back when Democrats stood over the landscape. I once lived and worked in a Democratic bastion — the Golden Triangle — and I witnessed plenty of political arrogance there.

Texas is a one-party state. There can be no doubt about that.

What the GOP must concern itself with, though, is what is happening at the national level. The Party of Lincoln has become the Party of Trump. Mechler and his fellow Texans cannot control what the probable GOP presidential nominee is going to say as he stumps the nation. If anyone is capable of making Texas competitive this fall it’s Donald J. Trump.

Mechler need not worry about demolishing Texas Democrats. He needs to focus his concern about whether the party’s presidential nominee’s statements about Hispanics and women will breathe life into an opposing party that’s already been given up for dead.

Good luck with that, Mr. Chairman.

One thought on “Texas Democrats already are ‘demolished’”