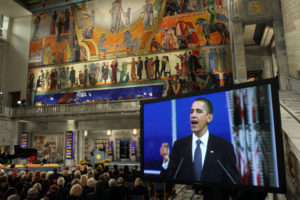 The New York Times has posted a story that bestows a dubious legacy on President Barack Obama.

He’s about to exit the presidency after serving two full terms with the country at war.

His time in office will include more time at war than FDR, Richard Nixon, LBJ or Abraham Lincoln, the Times reports.

I doubt very much that President Obama is going to tout this legacy, particularly as he starts serious planning for his presidential library.

It brings to mind something I brought up in this blog a while back, which is his receiving the Nobel Peace Prize during the first year of his presidency.

He’ll never give it back. I’m not suggesting he should, although I did write a blog that said I wouldn’t be all that upset if he did.

Should the president return that Peace Prize?

The Nobel committee honored the then-brand-new president as a rebuke, or so it has been speculated, to his immediate predecessor, George W. Bush. The Nobel panel thought little of President Bush’s decision to go to war with Iraq and many analysts suggested that awarding Obama the Peace Prize was meant to stick it in Bush’s ear over the Iraq War.

The official reason was that the Nobel Prize committee felt Obama had the promise of bringing the world to a new era of peace.

Is it the president’s fault? Does he shoulder the burden of continuing conflict around the world? No.

We’re still killing terrorists. We’ve been fighting a virtual all-out war with the Islamic State, which emerged from the rubble of the Iraq War as that country established a Shiite Muslim government, which is anathema to the Sunni Muslims comprising the Islamic State.

It’s clear that Obama delivered on his pledge to end our active combat role in Iraq. The Afghan War rages on as well, with troops remaining in that theater well past the time the president had hoped to bring them home.

I remain a supporter of Barack Obama. I believe he did a masterful job of infusing aid to shore up an economy in free fall. I also believe he’s done well in developing alliances around the world.

This wartime presidential legacy, though, is one that shouldn’t make any of us proud … least of all the man whose time as leader of the Free World is about to end.