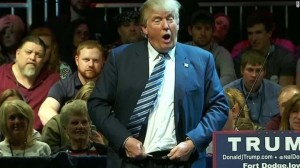 That was a nice break from the presidential political campaign.

High Plains Blogger has been pretty quiet for the past few weeks on the goings-on related to the Democratic and Republican campaigns for the White House. The intent was to stay quiet during the Christmas holiday. I had given thought to maintaining the moratorium through New Years Day. I admit it: I can’t do it.

So, I’ll be getting back in the game.

The Iowa caucuses are coming up, followed quickly by the New Hampshire primary.

Donald J. Trump continues to lead the GOP pack, although for the life of me I remain baffled to the max as to what’s going on with Republican voters. I keep hearing and reading things about how Trump has changed the rules of the campaign. How he’s rewriting the playbook.

The more offensive he is toward his primary foes, the better it goes for the guy. I thought he was toast at the very beginning when he denigrated Sen. John McCain’s heroic service during the Vietnam War. Good grief, the list of insults has grown beyond my ability to remember them all.

But … by golly he remains at the top of the heap.

The Democrats? It’s still Hillary Clinton’s contest to lose (although I’ve never quite understood that phrase; I’ll just use it anyway, because it’s what pundits keep saying).

I’m going to be watching and waiting for Trump to say the one thing that sends his campaign into the crapper. It might not be a single utterance, though, that dooms his weird campaign. It might be an accumulation of things that will dawn on GOP primary voters when they finally get the chance to cast actual ballots.

They’ll need to ask: Is this the guy we really and truly want to nominate to become the 45th president of the United States of America?

If it’s going to be Trump, well, as Hillary Clinton herself as said: Fasten your seatbelts.