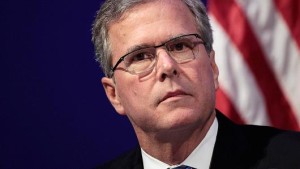 To be honest, I might be one of the few Americans, let alone non-Republicans, pulling for Jeb to get Trump’s goat.

Jeb wants Trump one-on-one, in a debate. Just the two of ’em. Man to man.

It won’t happen, of course, given federal election rules that prohibit the exclusion of other declared presidential candidates.

Jeb, though, is trying to inject some of the energy that Trump has said is missing from his campaign.

Why am I pulling for Jeb?

OK, a couple of reasons.

One is that I long have admired the man’s family and its history of public service to the country. I point specifically to his grandfather, the late Sen. Prescott Bush, and — of course — his dad, the 41st president of the United States, George H.W. Bush.

Daddy Bush — known as Poppy to his family — in my view was the most qualified man ever to serve as president. He brought a stellar public service resume to the White House.

The second reason is that while I didn’t vote for older brother George W. for any public office — as Texas governor or as president — I happen to like him personally. I’ve met the 43rd president on three occasions: once on an elevator in New Orleans during the 1988 GOP presidential convention; in a lengthy 1995 interview in Austin not many months after he became governor; and in 1998 when I interviewed him in Amarillo while he was seeking re-election as governor.

My face-to-face contact with George W. Bush persuaded me beyond a doubt that he got a  bum rap from those who accused him being a dim bulb. Bush proved to be an amazingly quick study as governor.

Will the younger Bush be able to energize his moribund campaign? I hope he does and I also hope he’s able to knock Donald J. Trump down a peg or four along the way.

I am not going to predict it will happen, but my version of hope does spring eternal.

2 thoughts on “Still pulling for Jeb”