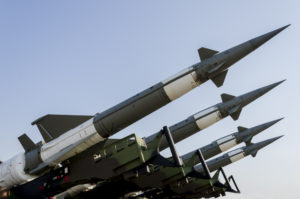 Vladimir Putin fits neatly into a number of descriptive niches. He is arrogant, egotistical, power-hungry, delusional … all those sorts of things.

I do not believe the Russian goon is stupid.

Which brings me to the fundamental question of the moment: Will the former top Soviet Union spy ignore the reasons why the USSR and the United States adhered during the Cold War to a policy of Mutually Assured Destruction in avoiding the use of nuclear weapons?

Russian forces are getting their asses kicked by Ukrainians on the battlefield as Ukraine is fighting to regain territory taken by the invaders several months ago. Putin launched an illegal, immoral and unconscionable war against Ukraine. He had presumed his forces would sashay into Kyiv in a few days, toss out Ukrainian President Volodymyr Zelenskyy and install a government to their liking.

It ain’t working out that way.

Now we hear reports of Putin pondering the use of chemical or (worse!) tactical nukes against Ukraine. President Biden, who has led the allied effort to resist Putin’s aggression, says, “Don’t … don’t … don’t” even think about it.

That would be an act of MADness beyond belief.

President Volodymyr Zelenskyy sought more help today from the United States of America in his fight against the Russian invaders who are seeking to pummel Ukraine into submission.

If the Ukrainians are following the lead of their president, Russia remains a huge distance from achieving its goal.

Zelenskyy made an appearance today before Congress, getting a bipartisan standing ovation. In his virtual speech, Zelenskyy asked for more weapons, even more stringent economic sanctions and for the United States to endorse the idea of establishing a no-fly zone over Ukraine; President Biden has adamantly opposed the latter strategy.

However, the U.S. president did pledge to spend $800 million in additional aid to Ukraine.

I want to offer a good word yet again for the skill that Biden has used in unifying NATO in opposition to the unprovoked Russian attack on Ukraine. NATO comprises nations with widely different cultures and political points of view. On this score, thanks in large measure to the pressure put on them by Joe Biden, NATO is singing in unison.

President Zelenskyy, therefore, has an ally at his front doorstep as well as across the ocean.

I wish him well as he seeks to stand firm against the Russian aggressors.

Volodymyr Zelenskyy is putting his acting talent to good use as he stands before the world and plays the part of a real-life hero to the people he is defending against the Russian attackers.

I have no qualms about the role Zelenskyy has assumed for himself.

The Ukrainian president has assumed the role of wartime leader and head of state. Russian forces invaded his country for purposes that remain somewhat murky. I believe I can figure out what Vladimir Putin has in mind: He wants to take Ukraine over, returning to a sort of de facto Russian state.

Meanwhile, while the Russian despot’s standing plummets around the world, his adversary in Ukraine sees his standing skyrocket partly because he young Ukrainian president has enough show biz in him to play the role he appears destined to play: of an emerging leader and star on the world political stage.

Let me be crystal clear. I do not hold anything against Zelenskyy as he seeks to build worldwide public support for the cause he has taken up, which is to defend his nation against an aggressor state and a dictator with delusions of godhood.

There is little I can do from my far-away perch in North Texas.

I happen to believe in the power of prayer, so I will offer plenty of prayer to the young Ukrainian leader.