Ron DeSantis is showing us what kind of presidential candidate he likely will become; he will trade on voters’ unjustified fears about proven medical treatments designed to rid the nation of a killer virus.

The Florida governor, likely to seek the Republican presidential nomination in 2024, vows to launch a probe into the evil nature of the various vaccines approved by the federal food and drug agencies to fight the COVID-19 virus.

DeSantis, certainly no medical doctor, is getting some shi**y advice from his staff on what to say about the vaccines. Every infectious disease I have heard has said they are safe, they are effective and they shouldn’t be cause for worry among those who need to take them to fight off the virus … that is still killing Americans.

What the hell is DeSantis talking about?

I believe he is blowing it out his backside. It sounds like a precursor to a GOP nominating campaign that is going to trade on more lies and deceit.

Hey, do you remember the TEA party gadflies who bitched out loud over billions of dollars in federal aid going to states battling natural disasters?

They would gripe about spending money without cutting expenses elsewhere to pay for the aid. My favorite example was the aid earmarked for Joplin, Mo., years ago as that city sought to recover from tornado damage; some Republicans in Congress resisted, demanding cuts in spending to pay for the aid.

Now come the Florida hurricane relief efforts. Florida Gov. Ron DeSantis, one of the TEA party golden boys, has resisted sending aid to other parts of the country. This time? He wants all he can get. Frankly, the state he governs deserves it! However, where are the TEA party stalwarts who complain about spending this kind of money.

Oh, wait. It might be because Gov. DeSantis is a rising political star and, by golly, the TEA party faithful dare not deny his state the assistance it deserves.

We are, after all, the United States of America. 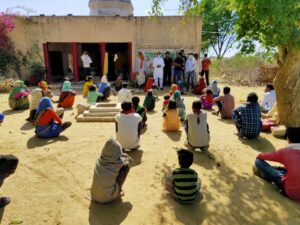 Two Republican governors — Greg Abbott of Texas and Ron DeSantis of Florida — are doing a fine job of turning human beings’ hardship into a political stunt that they believe will resonate with Americans.

They are engaging in some of the cruelest policy decisions many of us have ever seen. They have decided to send migrants seeking entry into the United States to more liberal-leaning states to … seemingly make some kind of political point.

I wanted to toss a heavy object at my TV earlier this week when I witnessed the image of DeSantis laughing at the torment he is inflicting on immigrants from Latin America. He put 50 of them — including families with small children — on a chartered jet and flew them to Martha’s Vineyard, Mass.

He told them they would begin processing for entry into the United States. The migrants instead were delivered to an empty parking lot. Ah, but there was DeSantis in Florida, yukking it up over the game he is playing with the lives of desperate human beings fleeing tyranny.

Greg Abbott isn’t any better. He is shipping migrants out of Texas on buses, delivering them to Chicago, Washington, D.C., and other communities known to be friendlier toward these migrants.

I understand fully that President Biden’s immigration policy so far is not dealing adequately with the numbers of people seeking asylum and even a safe place to escape the horrors of life in their home countries. However, is the Republican response any better? Do these governors offer any policy alternatives?

No! Instead, they play games with human lives in a disgraceful display of callousness. 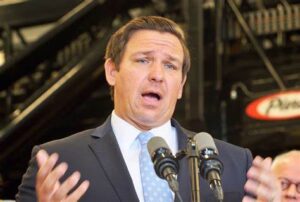 There had been a neck-and-neck battle throughout several states to determine which of them had the nation’s weirdest individual serving as governor.

Then a clear “favorite” emerged just the other day. The “winner” appears to be Gov. Ron DeSantis, Republican of Florida.

I want you to roll this one around for a moment. DeSantis issued a “no mandate” order, meaning that there would be no orders coming from local governments to have folks don masks to fight the COVID outbreak in Florida.

Ahh, but some school superintendents defied that order. They ordered teachers, students and staff to wear masks. De Santis’s response? It was to threaten to withhold the pay for public school educators who chose to defy the governor’s no-mandate edict.

Now I have to ask you: Is that just about the most outrageous thing you’ve heard come from a governor?

The irony, of course, is unbelievable. Florida — along with Texas — is the state with the most outbreaks of the Delta variant of COVID-19. It is logging the nation’s greatest infection rate, hospitalization rate and, oh yeah, death rate.

DeSantis, though, won’t budge from his order banning any additional health restrictions designed to, um, keep people alive. The Sunshine State nitwit says the COVID surge is coming from immigrants crossing the border from Mexico, a clear effort to pin something — anything! — on President Biden. I should mention that DeSantis is a possible 2024 GOP presidential candidate.

To be sure, Texas Gov. Greg Abbott, another Republican, has been giving DeSantis a run for the distinction of nation’s top gubernatorial weirdo. Abbott has issued a no-mandate order of his own, only to be challenged by some of the mega school districts in Texas; they were led by Dallas Independent School District Superintendent Michael Hinojosa, who has emerged as my latest hero in this political battle.

Institutions of higher learning in Texas are invoking mandatory COVID testing programs for their students, faculty and staff. That’s a start, although it’s not as in-your-face as the mask mandate that came from the DISD and other big-city public school systems.

I cannot figure this clown DeSantis out. He wants to run for president in 2024, or so we are being led to believe. He’ll be among a large field of Republicans seeking to run for the nation’s highest office.

I am wondering if he is going to use the withhold educator salaries gambit as a campaign ploy. If he does, he is toast. Please, governor … try to justify that bizarre and cruel policy.

I double-dog dare ya.