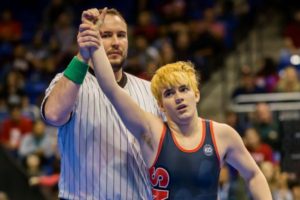 Color me confused and confounded over this one.

A transgender athlete — a girl who is becoming a boy — has just won a state high school wrestling championship as a girl. The athlete hails from Euless, Texas, a Fort Worth suburb.

I am not going to get into the debate over transgender rights with this blog post, but I do want to express my utter bafflement over how this story is playing out.

Mack Beggs wrestled this year as a girl despite taking testosterone — the male hormone designed to assist in the gender transformation. The University Interscholastic League, which governs high school athletes in Texas, has a rule that stipulates that athletes must compete according to the gender noted on their birth certificate.

Beggs was born a girl. He is taking hormone injections that — if I understand it correctly — boost an individual’s physical strength.

So, while competing as a girl, Beggs has the strength of a boy, which was apparent in the fact that Beggs went undefeated this year. He won all 56 matches while grappling with girls.

Beggs’ family said Mack wanted to rassle with boys, but the UIL rules wouldn’t allow it.

I am uncertain as to the number of transgender wrestlers out there who find themselves in Mack’s shoes. They are part or most of the way toward their journey from one gender to another. Must the UIL stick to that birth certificate identification rule or is there wiggle room for the governing body to make exceptions for someone such as Mack Beggs?

I cannot help but wonder about this individual’s future and whether winning a girls wrestling championship will have any meaning for him later on.

I presume Beggs will complete his gender change eventually. He’ll become a man. Will he display his trophy on his fireplace mantel and recall with pride and recall how he beat up on girls to become a state champion?

It looks to me as though the UIL has some rule revisions to ponder. 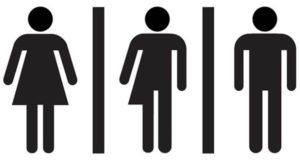 I am trying to understand this issue, but it’s escaping me … so far.

The Obama administration is going to send out a “directive” to public school systems throughout the country advising them against discriminating against “transgender” students.

It won’t have the “force of law,” according to federal officials. It will warn districts that they face being denied federal funds if they fail to comply with the directive.

What is giving me so much grief?

It’s the “transgender” issue all by itself.

So, if I hear them correctly, a man with all the requisite male body parts can use a woman’s public restroom. Same for a woman who wants to use the men’s restroom.

Simply identifying with the other gender doesn’t require them to dress appropriately, as I understand it. Am I wrong about that?

How do we know who’s truly transgender, therefore, and who, um, isn’t?

Here in Texas, the lieutenant governor weighed in on this matter by ordering the Fort Worth Independent School District superintendent, Kent Scribner, to resign because of guidelines he wrote governing the issue — in that school district.

I’ve stated already that Lt. Gov. Dan Patrick overstepped his bounds by meddling in a local issue. Scribner’s employment status should be determined exclusively by the school board that appointed him.

The federal “directive” seems to line up the same way. Have the federal courts ruled on the constitutionality of this matter? If so, then it got past me.

I’m trying to understand which rights are involved here, particularly as it pertains to individuals who haven’t yet been surgically altered to comply with their stated gender identity.

I have no issue, moreover, with those who’ve had the “gender reassignment” surgery and have been re-created into the appropriate gender. The medical procedure, by my way of thinking, removes the transgender confusion.

I’ve stated many times over many years that I don’t understand a lot of things.

This, most assuredly, is one of them.

It didn’t take long for the International Olympic Committee to settle this issue.

The 1976 Olympic gold medal in the decathlon will remain awarded to Bruce Jenner, an American athlete who won the event in Montreal, Quebec, Canada.

Responding to an online petition asking that the medal be revoked because Bruce Jenner is now Caitlin Jenner, the IOC said: “Bruce Jenner won his gold medal in the 1976 Olympic Games and there is no issue for the IOC.”

The petitioner is from Fort Worth. Jennifer Bradford said she is standing up for transgender rights.

My own view is that she’s standing up only for her own quest for publicity.

The IOC occasionally has had to deal with athletes whose gender has been questioned. There have been instances where female medal winners have been stripped of their medals because it was determined they possessed male DNA, giving them an advantage over their fellow female competitors.

That’s not even close to the issue here.

Bruce Jenner won the gold medal as a man. He’s now a woman.

Let’s move on to something else, shall we?