Sha’Carri Richardson asks a fascinating question about the standards being used by the International Olympic Committee regarding athletes’ use of certain drugs.

Richardson is a world-class sprinter from the Dallas area who prior to the Tokyo Summer Olympics this past year tested positive for marijuana; the IOC banned her from the Games. Richardson was heavily favored to win a medal in Tokyo but was denied the chance.

Kamila Valieva is a Russian skater who the other day tested positive for trimetazidine, a drug that — like THC — is a banned substance. Trimetazidine helps improve heart function and, thus, is considered a “performance enhancing drug.”

Valieva’s punishment? She’ll get to compete for a gold medal at the Beijing Winter Games. The IOC said it will delay a ceremony if Valieva captures a medal until after the matter is examined and investigated thoroughly.

“Can we get a solid answer on the difference” between their situations? Richardson asked on Twitter, after mediators ruled that Valieva should be allowed to skate in the women’s individual competition in Beijing.

“The only difference I see is I’m a black young lady,” Richardson said.

Well. It kind of looks that way to me, as well. 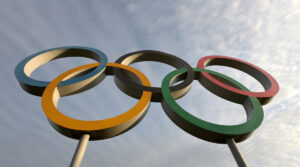 The juxtaposition of two compelling stories is mind-boggling in the extreme.

Donald John Trump says he wants to get the U.S. reopened by Easter, that it’s time to juice up our economy and get it “rarin’ to go.” The pandemic be damned, according to the president of the United States. We need to get our businesses restarted, he says.

The International Olympic Committee and the Japanese Olympic organizers today announced that the Summer Games in Tokyo will be delayed for at least a year. Why? Because the IOC and the Japanese government don’t want to expose spectators and athletes to unnecessary and possibly deadly harm by exposing them to individuals who might be carrying the coronavirus.

Do you get my point?

Donald Trump doesn’t give a crap about public health. He is more keen on revving up the economy. Olympic organizers are so concerned about public health that they are willing to take an unprecedented action by delaying the Summer Olympics for as long as it takes for everyone involved to be safe from potentially deadly illness.

On whose side are you?

I’ll stand with those who want to ensure public safety during this very perilous time. The current president of the United States is on the wrong side. 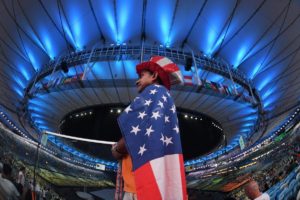 I’ll admit a few things here about the Rio de Janeiro Olympics and acknowledge a surprise or two.

* I didn’t like the opening ceremony. Yes, it was colorful to the max, but I didn’t understand much of its significance. My Olympic opening ceremony gold standard was set in 1996 in Atlanta, when the organizers surprised the world as Muhammad Ali — the Greatest — stepped out of the shadows to light the cauldron. I cried like a baby sitting in front of my TV watching The Champ light the flame, as did all the spectators in the stadium that night.

What’s more, there was something oddly out of place when the Brazilians decided to inject the politics of climate change and global warming into the ceremony. While I generally agree that climate change is a profound international problem, was the Olympic opening ceremony the appropriate place to make that statement?

* I hadn’t planned on watching much of the competition, but then I did watch. A lot of it.

* Michael Phelps made me proud. The zillion-time gold medal winning swimmer came back for his fifth Olympics and at the age of 31 managed to dominate the men’s swimming competition. He overcame some serious personal demons to get himself into the best shape of his life and he didn’t disappoint. Five golds and a silver? Not bad … for an “old man.”

* Katie Ledecky was the actual star of the pool, though. The young American not only was winning her races, she was winning them by a lot.

* Simone Manuel was another swimming star who made me proud. The young Texan came out of nowhere to capture our hearts, particularly as she wept while listening to the National Anthem during the awards ceremony.

* The U.S. women’s gymnastics team. What more can I say about those youngsters? Holy moly, man!

* Gabby Douglas, one of the gymnasts, had nothing for which to apologize for not putting her hand over heart during the anthem. She stood there respectfully and showed class by riveting her eyes on the flag as it rose.

* Usain Bolt is the fastest human being in the world. The Jamaican sprinter served notice that it’s not how well you start a race that matters, it’s how you finish it. As ol’ Dizzy Dean used to say while calling a baseball game on TV, “That fella can pick ’em up and lay ‘e down.”

* Oh, and one more takeaway. The swimmer Ryan Lochte, who is 32 years of age, is about to lose a fortune in endorsement income because he messed up so royally by partying with his swim-team buddies and then making up the story about being robbed at a Rio gasoline service station. Good grief, dude! Get out of my face!

I don’t know how the International Olympic Committee chairman is going to characterize the Rio Games when he closes the event down Sunday night. Will it be “outstanding,” or “exceptional,” or simply some other less-glorious adjective? Observers often rate the success of an Olympics by the way the IOC boss hails the event at its conclusion.

It was a fun ride in Rio.

It didn’t take long for the International Olympic Committee to settle this issue.

The 1976 Olympic gold medal in the decathlon will remain awarded to Bruce Jenner, an American athlete who won the event in Montreal, Quebec, Canada.

Responding to an online petition asking that the medal be revoked because Bruce Jenner is now Caitlin Jenner, the IOC said: “Bruce Jenner won his gold medal in the 1976 Olympic Games and there is no issue for the IOC.”

The petitioner is from Fort Worth. Jennifer Bradford said she is standing up for transgender rights.

My own view is that she’s standing up only for her own quest for publicity.

The IOC occasionally has had to deal with athletes whose gender has been questioned. There have been instances where female medal winners have been stripped of their medals because it was determined they possessed male DNA, giving them an advantage over their fellow female competitors.

That’s not even close to the issue here.

Bruce Jenner won the gold medal as a man. He’s now a woman.

Let’s move on to something else, shall we?

Can we please stop, cease, terminate this ridiculously idiotic notion launched by a Fort Worth woman to revoke the gold medal awarded to the winner of the 1976 Olympic decathlon?

Jennifer Bradford has launched an online petition that seeks revocation of the gold medal awarded to Bruce Jenner after he won the decathlon at the Montreal Olympic Games.

Bradford said she wants to support the “transgender community” because Bruce Jenner is now Caitlyn Jenner. Bruce the man has become Caitlyn the woman. The petition was posted to a website called change.org and Bradford is asking the International Olympic Committee to revoke the gold medal.

Give me a break. Pardon me while I mince no words.

This is about as stupid a notion as I can imagine.

Bruce Jenner was fully a man when he won the decathlon, becoming the “world’s greatest athlete.”

His transition to womanhood only has occurred with the past year or so — give or take.

The petitioner argues that the only way the petition would be invalid would be if it can be proved “that Bruce Jenner and Caitlyn Jenner are two entirely different people.”

Um, Ms. Bradford? I’ve got news for you. They are.

Now, please return to your anonymity and stop making a spectacle of yourself.

Imagine that. Getting ready to welcome the entire world to your home might be the most daunting task imaginable.

So the folks in Rio de Janeiro are learning.

They’re trying to build a golf course to play host to an Olympic golf tournament at the 2016 Games. It might not get done.

I keep thinking of what my ancestral homeys encountered when they hosted the Athens Olympics in 2004. They, too, faced daunting challenges and fears among International Olympic Committee brass that they wouldn’t be able to finish their preparation.

Chief among those worries was the infighting and bickering among the men who had been charged with organizing the event. Enter the woman, Gianna Angelopoulous Daskalaki — who prepared the Greeks’ bid to host the Games — to save the day. She did and the Games turned out to be among the most spectacular in recent memory.

They got all the venues done — on time. Barely so, but they got it done.

I’m not yet worried about whether the Brazilians will finish the job.

They’ve got two whole years to get it done.

Time to get busy, Rio.

Tradition means something after all with the International Olympic Committee.

The IOC has announced that wrestling — the oldest Olympic sport of them all — will be competed at the 2020 and 2024 summer games. The IOC announced this week that Tokyo would be the host city for the 2020 Olympics; the IOC will announce the 2024 host city in 2017.

The IOC had talked for some months about getting rid of wrestling, which would have constituted one of the dumbest, most heartless and ridiculous decisions the Olympic governing body had ever rendered. IOC authorities said the public had lost interest in wrestling. It planned, though, to keep synchronized swimming and rhythmic gymnastics.

Get rid of wrestling? You must have been kidding!

The Olympics began in 776 B.C. in ancient Olympia, Greece. Wrestling is believed to be the first sport ever conducted at those ancient Games.

The athletes, I hasten to add, competed in the nude.

I suppose if the IOC wanted to gin up interest in wrestling in the 21st century, it could allow wrestlers to shed their tights and compete as their grappling forebears did back in the old days.

Thanks goodness that tradition still speaks loudly when it counts.