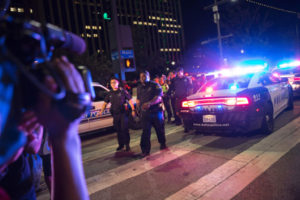 I’ve already commented on a bill authored by U.S. Sen. John Cornyn that would federalize the crime of killing a police officer.

I’m against it. States that have the death penalty — such as Texas (Boy, howdy! Do we ever!) — already make cop-killing a capital punishment offense.

Cornyn’s bill is a reaction to the deaths of the five police officers in Dallas this past week.

A friend of mine reminds me, though, that he opposes Cornyn’s legislation, too, for another reason. It flies in the face of conservatives’ usual mantra that calls for “limited federal government.”

He wonders why GOP lawmakers react with this expansion of federal authority.

I think I know. They do it because it’s politically popular. Quite naturally, Democrats do the same thing when the issue suits their philosophical bent.

In this case, Americans are outraged over the officers’ death. So, in swoops Sen. Cornyn — a true-blue GOP conservative — to propose a bill that deals directly with that outrage. He wants to add another federal law to the books.

But what has happened, though, to the conservative view that less federal authority is better for everyone?