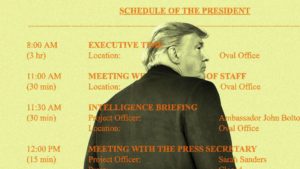 Axios is reporting that Donald Trump spends a lot of what is being called “executive time,” meaning time off the clock, in the White House residence, doing something I presume other than reading briefing papers and intelligence reports.

This really isn’t a huge deal to me. I’ve noted already many times that I don’t even mind the president playing a lot of golf. What irks me about all that golf time is that this president promised he wouldn’t do it . . . and then he reneged on that promise!

Presidents are never off the clock. They’re only a radio message or phone call away from being summoned to respond to a national emergency; by that I mean a real emergency, not a phony one such as what Trump says is occurring on our southern border.

As for the executive time business, I  wish Trump would spend more time studying how to be president. He ought to learn about what the U.S. Constitution lays out in terms of executive power, and how the framers established Congress and the courts as co-equal branches of government. He doesn’t seem to know any of that.

Then again, maybe he is spending his executive time actually reading. Do you think? Nahhh! If he was doing it we certainly would know about it. He’d be firing off Twitter messages informing us of all the brainy work he is doing behind the scenes.

Axios suggests he spends a lot of time each day reading newspapers and watching TV before he heads to the Oval Office, or the Cabinet Room, or the Situation Room to do the things that presidents do.

Still, the Axios story does reaffirm what many of us have noted all along, that we have elected a bizarre, unconventional and, um, “unpresidented” fellow as head of state, commander in chief and chief executive.

I have noted many times in this blog that presidents of the United States are “never off the clock.” They become presidents, meaning they have the awesome power of the office at their fingertips even when they’re not sitting in the Oval Office or in the Situation Room.

That said, presidents deserve some time to spend with their families. That courtesy most certainly extends to their staff. To their Cabinet officers. To other politicians. To those who make or administer public policy.

The issue has risen to the level of public discourse in recent days. I maintain that as much as I might criticize a politician’s public policy decisions, I find it offensive to accost them while they are spending time with their family or other loved ones. 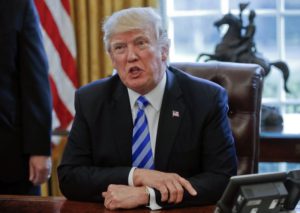 I get that Donald J. Trump wants to open up lines of communication between his office and those of other world leaders.

The president’s motives appear to be noble.

But hold on! He’s giving out his personal, private cellphone number to those other leaders? Is that what I’m hearing?

Cellphones aren’t secure. I keep hearing how they’re vulnerable to, um, hacking. People can listen in. Bad people can listen and do terrible things in reaction to what they hear.

And so the president of the United States wants to talk openly, and I presume candidly, with world leaders about the myriad problems facing the world.

If the president wants to maintain open communications with other leaders, I have an idea. Let ’em call you on the secure line in the Oval Office, or in the Situation Room.

Handing out personal cellphone numbers is fraught, shall we say, with some serious national security concerns. Don’t you think?

And didn’t the president — when he was running for the office — bellow incessantly about all the alleged security breaches created by Hillary Clinton’s use of her personal e-mail server while she was secretary of state?

President Obama likely needs to rethink his assessment of Russia’s place in the world of great powers.

He said this week that Russia is a “regional power” that doesn’t pose the greatest threat to the United States. The president said his greater concern is a nuclear bomb going off in Manhattan.

Why does the president need to reconsider this assessment of Russia? Two words come to mind: nuclear arsenal.

Russia inherited the bulk of the Soviet Union’s stockpile of nukes when the U.S.S.R. folded its tent in 1991. That fact alone makes the Russians a world power, no matter the strength of the Soviets’ main foe, the United States of America.

President Obama has been asked in recent days whether 2012 Republican presidential nominee Mitt Romney was right to call Russia our No. 1 geopolitical foe. Obama said “no,” which comes as no surprise. Indeed, he is right to gauge the threat posed by international terror networks as the nation’s top threat. The Russian incursion into Ukraine, its influence on Ukrainian internal affairs and its threat of more military intervention should be of grave concern throughout Europe.

The president, though, seems intent on sticking it in Russian President Vladimir Putin’s eye when he downplays the worldwide threat that Russia poses. Yes, the Russians are a significant regional power. They also do possess all those nukes that, as near as anyone can tell, are capable of destroying life as we know it on Planet Earth.

That fact alone makes them a global threat.

Whatever the president says in public probably doesn’t mirror what he and his brain trust are saying about Russia in the Situation Room.