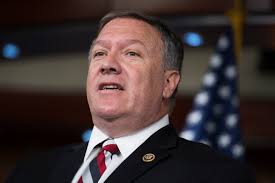 Mike Pompeo is likely to be confirmed as the nation’s next secretary of state, but he’ll take strange route on his way to leading the nation’s diplomatic corps.

Pompeo is the CIA director whom Donald Trump selected to succeed Rex Tillerson at the State Department. He has run into trouble on his way to confirmation: Pompeo won’t have the blessing of the Senate Foreign Relations Committee, which conducted confirmation hearings on Pompeo’s nomination.

A Republican committee member, Rand Paul of Kentucky, is going to vote against Pompeo’s nomination. That will result more than likely in a vote of no confidence from the panel.

That won’t derail his confirmation. The full Senate will get to vote on it, but Pompeo will gain the support of Senate Democrats who might be in trouble in states that Trump carried in the 2016 presidential election. Heidi Heitkamp of North Dakota and Joe  Manchin of West Virginia come to mind; let’s toss in Bill Nelson of Florida while we’re at it. They’re all running for re-election, which seems to give Pompeo a leg up in this strange journey toward confirmation.

Actually, I hope Pompeo does get confirmed. The State Department needs a steady hand and I think Pompeo can provide it … if only the president will allow him to lead the agency.

Tillerson had to fight the occasional battle against being undercut by the president. Tillerson would make a pronouncement and then Trump would countermand him. I don’t want that to happen with the new secretary of state, who’s got a big job awaiting him immediately — which happens to be the preparation for the planned summit between Donald Trump and North Korean despot Kim Jong Un.

What’s more, as head of the CIA, Pompeo has joined other U.S. intelligence officials in confirming the obvious: that the Russians meddled in our 2016 election.

This man needs to be our secretary of state. 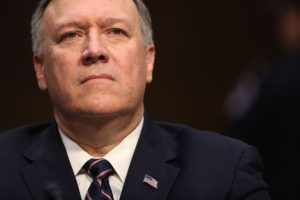 Can there be a more complicated set of circumstances awaiting the next secretary of state?

Donald Trump tweets the firing of Secretary of State Rex Tillerson. He tweets it, I’m tellin’ ya. Tillerson said he doesn’t know why he was canned. The president then said he’s going to nominate CIA Director Mike Pompeo to be the next top diplomat.

Oh … and this is occurring while the United States is beginning to prepare for a potentially historic summit between Trump and North Korean dictator Kim Jong Un.

Tillerson today thanks everyone under the sun for the opportunity to serve as secretary of state. Well, almost everyone. He doesn’t thank Trump. Um, I’m betting Trump and Tillerson aren’t going to talk much to each other going forward.

I’m worn out — and I’m out here in the Flyover Country peanut gallery.

Pompeo also happens to one of those intelligence experts who believes the Russians meddled in our 2016 presidential election. He has said so on the record. He joins a distinguished list of officials: the director of national intelligence, the head of the National Security Agency, the president’s national security adviser (who well could be the next one out the door). They’ve all said the same thing: The Russians did it and they all contradict the idiocy spouted by the president, that if Vladimir Putin says he didn’t do it, then that’s good enough.

I sincerely hope someone on on the U.S. Senate Foreign Relations Committee, which must vote to confirm Pompeo, asks him directly — once more — whether he still believes the Russians meddled in our election.

And with equal sincerity, I hope the Senate wastes little time in getting Pompeo confirmed. He’s got a full plate waiting for him when he takes over.

I mean — crap! — he’s got to prepare the president for this summit with Kim Jong Un. I’ll also have to hope Donald Trump will listen to what the new guy has to say.

More than 40 years ago, the U.S. Senate Foreign Relations Committee asked some tough questions about the president of the United States’ fitness to be in command of the nuclear launch codes.

President Richard Nixon was being swallowed up by the Watergate crisis. Questions arose about whether the president would do something foolish in a moment of intense political anguish.

Flash forward. The Senate Foreign Relations Committee of today is now concerned, apparently, with the current president’s ability to handle this awesome responsibility. Senators didn’t come to any conclusions or seek any substantial change in the policy, but they got to air their concerns on the record about Donald John Trump.

As Politico reports: “We are concerned that the president of the United States is so unstable, is so volatile, has a decision-making process that is so quixotic that he might order a nuclear weapons strike that is wildly out of step with U.S. national security interests,” Sen. Chris Murphy (D-Conn.) said during a Foreign Relations Committee hearing that yielded few clear answers about checks on the commander in chief’s power. “Let’s just recognize the exceptional nature of this moment.”

Though Republicans were not as vocal about their concern, some did express worry that one person alone can make the decision to launch a nuclear war.

The president hasn’t yet demonstrated the complete understanding of command and control. He keeps popping off via Twitter, threatening North Korea with destruction.

And oh yes, the president has virtually sole authority to launch nuclear weapons. The policy was designed during the Cold War when the United States need a quick response in case the Soviet Union decided to launch missiles against us.

The Cold War is over, although the peril of a nuclear strike remains acute, given the enormous number of nuclear-armed nations around the world.

Which requires a U.S. president to be of sound temperament and judgment. The Senate panel today sought to explore those issues today as it relates to the current commander in chief.

Given the president’s behavior and the goofiness of his public pronouncements, senators have ample reason to wonder out loud about the commander in chief’s ability to keep us safe. 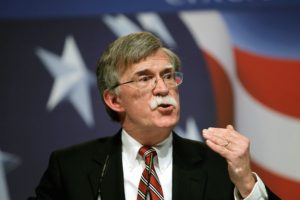 I am pretty sure I heard Donald J. Trump call the Iraq War a “disaster,” a “mistake,” a “terrible decision.”

It’s not clear to me, though, whether the president-elect actually opposed the war from its beginning, or during the period leading up to the first shots being fired in March 2003.

But during the 2016 presidential campaign Trump did criticize the Bush administration’s decision to go to war in Iraq.

Why, then, is he going to send a deputy secretary of state before the Senate Foreign Relations Committee for confirmation?

John Bolton is a serious war hawk. He believes in regime change. He supported the Iraq War. He bought into the notion that the late Saddam Hussein possessed weapons of mass destruction. He has called for going to war with Iran. At least one key Republican committee member, Rand Paul of Kentucky, says he’ll vote automatically against Bolton’s confirmation.

Bolton is hoping to join a State Department team headed by a designated secretary of state, Rex Tillerson, whose confirmation itself isn’t a sure thing. He’ll have to answer many questions about his friendship with Russian strongman Vladimir Putin, who Sen. John McCain has labeled a “butcher” and “murderer.”

But this Bolton character, a former U.N. ambassador, brings a serious dichotomy into play.

The president-elect opposed the Iraq War — he says — and yet he’s going to bring the hawkiest of hawks into his foreign-policy team?

I do not understand any of this.

It’s sending me a grim message that the federal indictment of Sen. Robert Menendez of New Jersey on corruption charges signals a hunt for others who are might be involved in the same kind of cozy relationships alleged in the 68-page indictment against the Democratic lawmaker.

You hear about these kinds of things occasionally involving senators and House members. They do favors for pals, develop relationships that raise a lot of questions — not to mention eyebrows.

Is Menendez alone in this? That trick knee of mine tells me “No. Not by a long shot.”

Menendez is the leading Democrat on the Senate Foreign Relations Committee. He’s stepping down from his leadership positions in the Senate until this matter gets resolved.

Also indicted is Dr. Solomon Melgen, a Florida ophthalmologist and longtime friend of Menendez. The indictment goes into great deal about the emails exchanged over several years between the men, suggesting alleged criminal activity, deal-making and favors.

I’m wondering this morning if all this will lead investigators down a lot of other paths, toward the doorsteps of other members of Congress.

This is not exactly a scoop, but I thought I’d ask it anyway: Why do members of Congress have to make speeches when they’re assembled to seek answers to questions from key government officials?

It’s happening as I write this brief blog post.

The Senate Foreign Relations Committee is quizzing Secretary of State John Kerry about the U.S. plan to defeat and destroy the Islamic State. But without fail, from senators on both sides — Democrats and Republicans — are embarking on long-winded soliloquies before getting to whatever question they want answered from the nation’s top diplomat.

Kerry, of course, knows the score. He served in the Senate for nearly three decades and engaged in some tiresome speechmaking while grilling witnesses before the very committee he once chaired.

Many of out here in the Heartland know what gives, too. Politicians by definition usually are in love with the sound of their own voices. So they want to hear themselves being heard, yes?

I’m reminded of the time during Senate confirmation hearings to decide whether Samuel Alito should join the U.S. Supreme Court. The chairman of the Senate Judiciary Committee gave each senator 30 minutes to “ask questions” of the nominee. Then it came to Sen. Joe Biden, D-Del. CNN put a clock on Biden, who then pontificated for more than 28 minutes.

Biden eventually asked the question and Alito had less than two minutes to respond. Time ran out and the chairman called on the next senator.

I’d much rather hear what a witness has to say hear for the umpteenth time what a senator of House member thinks about this or that issue.