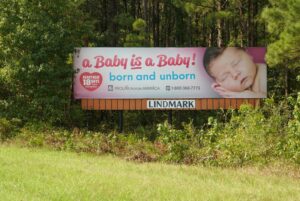 Three Texas communities — Big Spring, Colorado City and Rusk — have thumbed their collective noses at a legal activity that I acknowledge fully has its sworn enemies.

The cities all have created what they are calling “Sanctuary Cities for the Unborn.” They have declared that abortion is illegal in their cities and I will presume women who obtain them are subject to criminal prosecution.

Abortion-rights activists are furious, as they should be. Why? Well, it’s a simple notion, truth be told. The U.S. Supreme Court ruled in 1973 that a woman’s right to terminate a pregnancy was legally protected under federal law. Subsequent high court rulings have upheld the landmark Roe v. Wade decision.

Thus, the activity remains legal. Does it produce a desirable outcome? Of course not. However, I am in no position — nor is anyone else, for that matter — to dictate to a woman how she must make such a gut-wrenching decision. That is her call in consultation with her partner, her physician … and her conscience.

The Texas Tribune reports: The American Civil Liberties Union has said it is seeking to strike them down. Three towns — Mineral Wells, Omaha and Jacksboro — have voted down similar ordinances or walked them back under advice from city attorneys.

Big Spring, Colorado City and Rusk haven’t yet made their decisions final.

I am all for local control. I dislike states telling cities and towns that they cannot, for example, install electronic devices to help police enforce traffic laws. However, the U.S. Constitution remains the law of the land and in the case of abortion, the Supreme Court already has stood behind the Constitution as the final arbiter on the inflammatory issue of whether a woman can choose to terminate a pregnancy.

Texas already has told cities they cannot create sanctuaries to shield undocumented immigrants from deportation. Yes, I am aware of the intense political differences between illegal immigration and abortion.

But the Texas cities that are seeking to create “sanctuaries for the unborn” need to prepare for a fight that they should not win. 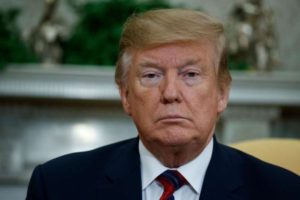 Donald Trump has no sense of decency. None. Nothing, man!

He now is threatening to send illegal immigrants to those so-called “sanctuary cities” as a cudgel to batter congressional Democrats he says refuse to enact any meaningful improvements to the nation’s immigration laws.

Wow! How do you fathom that a president of the United States would actually do such a thing? If you can, then you’re far better than I am.

Sanctuary cities, you’ll recall, are those communities that establish themselves as “sanctuaries” for illegal immigrants. Texas legislators two years ago passed a law banning such cities in this state. Truth be told, I am not a fan of sanctuary cities, either. The policy does little if anything to advance the cause of immigration reform, which, by the way, is what many congressional Democrats are seeking instead of the ham-handed approach that the Trump administration is taking to combat the issue of illegal immigration.

Indeed, this threat to send undocumented immigrants to sanctuary cities is a profound demonstration of the heartlessness that Trump exhibits every single day as president of the United States of America.

California Attorney General Xavier Becerra — a former member of Congress — calls the president’s threat a sign of “vindictiveness” reminiscent of the Watergate era.

I agree with him. Good grief, Mr. President, sit down with your foes and start working seriously and diligently on a comprehensive plan to reform our nation’s immigration system. 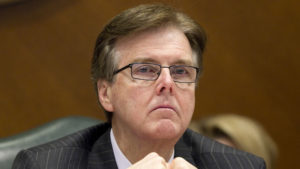 I should have written this note to Texas Lt. Gov. Dan Patrick long ago. OK, I’m late with it, but I’ve got to get something off my chest.

Dan — I’ll call you Dan, OK? — I wish you wouldn’t purport to speak for me. Your TV ads keep saying “Democrats” want to do this and that. The implication is that Democrats all think as one. They’re all lemmings. Sheep. Mindless robots.

Let me stipulate something right off the top. I consider myself a liberal. I align with the Democratic Party. I am inclined to vote for more Democrats than Republicans when I vote on Tuesday. However, I do split my ticket and I’ve found a few Republicans on the ballot worthy of my electoral support.

However, not all Democrats support the things you say they do.

Open borders? Nope. Sanctuary cities? This one’s tougher, but “no” on that one, too. Granting undocumented immigrants the right to vote? C’mon, man … knock it off!

And I do not want to “turn Texas into California.” I moved to Texas for a reason back in 1984. I came here to take a job as an opinion journalist in Beaumont. I like Texas just fine. I like the people. I like the diversity. I like the lay of the vast land. I like not having to pay a state income tax. That was 34 years ago, Dan.

I am not crazy about the political climate here, but then again, my life isn’t centered on politics. There’s more to living than worrying about politicians. I choose not to be consumed 24/7 by the whims of political leaders.

If I wanted to “turn Texas into California,” Dan, I would move to California. Just so you know, I happen to like California, too. I am sure you’ve been there. The state has a lot to offer. Tall trees and mountains, pretty beaches, sandy deserts, great skiing, glitz and glamor.

And San Francisco, Dan, is arguably the most beautiful city on Earth.

But for crying out loud, dude, stop trying to put words in my mouth! Stop purporting to speak for me. You and others of your political ilk don’t know what you’re talking about.

I intend to vote Tuesday with a clear head and clearer conscience and I am hoping it all turns out the way I want it to turn out.

Have a great day, Dan. 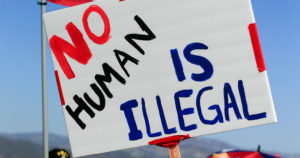 Donald John Trump really and truly doesn’t like those who come into this country illegally.

The president laid some pretty harsh language on them during a White House meeting this week. His description? He calls them “animals.”

There you go, Mr. President. Many of the undocumented immigrants who have come to the United States have managed to, um, graduate from college (some with academic honors), rear their families, pursue fruitful professional careers, serve in the U.S. military (and dying for the country in the process).

These are who the president of the United States calls “animals”?

According to National Public Radio: During a White House roundtable discussion with law enforcement officials and political leaders, Fresno County Sheriff Margaret Mims expressed frustration that California law signed last year by Gov. Jerry Brown forbids informing U.S. Customs and Immigration Enforcement of undocumented immigrants in the state’s jails, even if police believe they are part of a gang.

Trump’s response: “We have people coming into the country — or trying to come in, we’re stopping a lot of them — but we’re taking people out of the country, you wouldn’t believe how bad these people are. These aren’t people. These are animals,” the president said.

The White House meeting dealt with sanctuary cities, where municipal officials have declared their communities to be safe havens for those who enter the country without proper documentation. Trump wanted to make some idiotic generalization about every person who sneaks into the country.

As usual, the president’s overheated hyperbole is inaccurate, unfair and without any basis in fact.

I understand fully that some undocumented U.S. residents them come here and commit violent crimes. They harm others. Has it been proven, though, that undocumented immigrants do so at a more frequent rate than U.S. citizens?

The president continues to speak only for those who comprise his political base. He doesn’t speak for me. 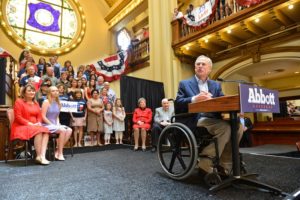 There he goes again.

Texas Gov. Greg Abbott has launched his re-election bid by nationalizing a fundamentally internal contest. Texans need no reminder from the first-term governor that Nancy Pelosi or George Soros have little in common with rank-and-file voters here.

Abbott said in San Antonio: “Every far-left liberal from George Soros to Nancy Pelosi are trying to undo the Texas brand of liberty and prosperity,” Abbott said, referring to the Democratic mega donor and U.S. House minority leader, respectively. “I have news for those liberals: Texas values are not up for grabs.”

Fine, governor. I get that. Many of us in Texas get it right along with you.

The question, though, will be as it is with any public official seeking re-election: What are you going to do during the next four years in office and why should Texans cast their vote for you?

Truth be told, Abbott inherited a state economy that was in good shape four years ago. It continues to rock along, even with a dramatic reduction in the price of oil.

But I found it fascinating to hear about the progress made by the state during his first four years. The end of sanctuary cities? Business tax cuts? Abortion restrictions? Road construction?

Hmmm. Who made all that possible? I believe I’d heap the responsibility on the Legislature, which sent these bills to Abbott’s desk, which he then signed into law.

Well, I understand how pols take credit for others’ work. It’s part of the political process, I suppose.

Abbott is likely facing an easy ride toward re-election. I’m not expecting a major Republican Party primary contender … although I do believe House Speaker Joe Straus would provide a serious challenge for the governor — if he doesn’t run for lieutenant governor.

The Democrats? Pfftt! The state remains as Republican Red as any in the country.

But I’ll await Gov. Abbott’s myriad pledges for how he intends to govern for the next four years. Just keep Nancy Pelosi and George Soros out of it.

Juan Francisco Lopez-Sanchez is accused of killing Kate Steinle in a horrific act of random violence.

It happened in San Francisco, a “sanctuary city.”

Lopez-Sanchez was in this country illegally. What’s worse — and a lot worse, at that — is that he’d been deported four times, sent back to Mexico. His fifth illegal re-entry resulted in Steinle’s shooting death.

This case has resonated on several levels, each of which is worthy of comment.

First, there must be some head-knocking occurring at Immigration and Naturalization Service, Border Patrol and Homeland Security offices. How in the world does someone keep getting into this country after getting caught and deported multiple times?

Second, it is time to re-examine this whole concept of “sanctuary city,” which is aimed at giving immigrants a way to avoid being captured by federal immigration authorities. As USA Today said in an editorial: “San Francisco is one of nearly 300 cities and counties across the country with sanctuary laws or policies aimed at separating federal immigration enforcement from local policing, in order to build trust between immigrant communities and local police. The reasoning goes like this: If immigrants, including millions of undocumented ones, see local police officers as a tool for deportation, they will not report crimes or come forward as witnesses, even when they are victims, and public safely will suffer.”

That reasoning did not work in this tragic case.

Third, President Barack Obama has been oddly silent about Steinle’s death. Why is that, Mr. President? Your critics make a valid point that you should be leading the nation in mourning the death of a young woman whose life was taken by someone who shouldn’t have been here in the first place.

Am I going to join the Donald Trump amen chorus in implying that most illegal immigrants are here to commit the kind of act that Lopez-Sanchez is accused of committing? Not on your life.

But the system failed us badly. A young woman’s family is grieving. A nation needs answers.