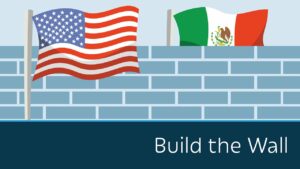 A fellow I know has sought to determine who among his social media network actually thought “Mexico was going to pay for the wall.”

Here’s my answer: No one in their right mind could possibly have thought such a thing. Then again, it can be argued that Donald Trump’s signature campaign promise appealed directly to those who, um, aren’t in their “right mind.”

So I guess the weird among us could have believed that Mexico would foot the bill for a 2,000-mile-long barrier between the United States and Mexico.

This is the so-called “magic” of Trump’s successful campaign for the presidency. He made the pledge repeatedly while running for the only office he ever has sought. The cheers the promise elicited egged him on. He absorbed all that love and adoration as an endorsement of his dubious belief that Mexico would write us a check for billions of bucks to build a barrier.

There was this little problem that those “base” supporters of Trump didn’t factor into their notion. The federal government’s price would escalate dramatically because of that darned Fifth Amendment provision that says the government cannot seize private property without providing adequate compensation to the landowners for the land it would take.

Trump has blamed Mexico for its own lax border security. He has said that “Mexico is sending” criminals into this country, suggesting that the government somehow should be held responsible for those who seek entry into the United States illegally.

Trump made a promise he couldn’t keep. He cannot possibly force another sovereign country to do his bidding.

This individual doesn’t know what he’s talking about. What’s more, nor do those who cast their votes for him based primarily on that phony promise.

I keep getting this feeling in my gut that Donald J. Trump’s insistence that we have an immigration “crisis” is a figment of the president’s imagination.

Or worse, it is a ploy he is using to curry favor with Americans who have this fear about immigrants of all stripes, legal or otherwise.

Trump keeps harping on the flood of immigrants pouring through our “open border” to do harm to Americans. He is managing to cast all immigrants in the same ultra-negative light: They’re murderers, rapists, drug dealers, sex traffickers, kidnappers.

Here’s the nasty part of it: Trump appears to be succeeding in this hideous effort.

The media are covering this “zero tolerance” story with zeal and aggressiveness. The children who have been separated from their parents and sent to something called “tender age” internment camps have broken our hearts. Former first ladies have issued statements condemning the practice.

I keep asking myself: Why? Why are we reacting with such hysteria over this story?

I heard a statistic the other day about how border crossings are down. Yet to listen to the president tell it, the nation’s southern border is awash in people pouring northward into Texas, New Mexico, Arizona and California.

I don’t spend a lot of time along the Texas border with Mexico, although I recently did travel to Laredo. My wife and I spent a few nights at a Texas state park along the Rio Grande River. We also spent some time on the road traveling southeast along the river.

What did we see during those few days along the border? We saw Texans going about their daily lives. We looked at families playing at parks. We saw people shopping. They were enjoying meals. They were walking their pets along city streets.

We saw life continuing at a normal pace.

We did not see a community in crisis. We didn’t see a region gripped by a flood of illegal immigrants/criminals.

This was two years ago. Has it changed dramatically since then?

I also believe the president of the United States — who launched his first political campaign in 2015 with a pledge to curb immigration along our southern border — has created a crisis where none exists.

ROMA, Texas — This is one of those hardscrabble towns strung out along the Rio Grande River just on this side of our border with Mexico.

The main drag is U.S. Highway 83, which is populated with assorted convenience stores, an occasional chain outlet, fast-food restaurants and a flea market.

You see a lot of Spanish-language signage here. We stopped for lunch at a pizza joint and the young hostess who served us there was pleasant and attentive.

We did not see something that one might be tempted to look for: hordes of illegal immigrants.

We did notice two U.S. Border Patrol vehicles parked on the medium just northwest of Roma about a mile or so apart. All was quiet at both locations.

I bring this up only to illustrate what I think has been something of a mischaracterization by some politicians — including one highly notable one — about what appears to be going on along the U.S.-Mexico border.

I understand fully that people are indeed sneaking into the United States without the proper documentation. I also understand that some of them are, um, undesirable.

The president of the United States — Donald John Trump — wants to build a wall the length of our southern border. I keep wondering: how and why?

We stopped briefly at Falcon State Park and noticed a wide and deep reservoir between the United States and Mexico. We didn’t see anyone splashing out of the reservoir behind the Falcon Lake Dam; nor did we see any boats loaded with families.

OK, we are just two people out of many who visit places like this. We were unable to cast our eyes on every mile along our border. We did see a good bit of it from Laredo to Roma.

I am going to presume as well that had we kept going we would have seen more of the same. Which is to say we’d see nothing out of the ordinary.

Life seems to go on in South Texas. It all looks pretty normal to me.

Some pols, though, would have us believe we’re in crisis mode. We’re being overrun by international terrorists, drug dealers, murderers and rapists. That message seemed to resonate with a lot of Americans during the 2016 presidential campaign.

That message was lost on me. Based on what we saw along the border, I understand why.

You meet the most interesting people at RV parks.

We made an acquaintance the other evening. An elderly couple is traveling toward Calgary, Alberta to attend the Calgary Stampede. They were parked a few yards from us at an RV park in Dodge City, Kan. I noticed the Texas license plate on their fifth wheel.

“Where in Texas are you from?” I asked. He said he lives in McAllen.

We chatted a little bit. Then he told me the “drought is broken” in South Texas.

He said they got about 7 inches of rain in a single day. The Rio Grande River is flowing nicely, he said.

I mentioned to him that we’ve nearly achieved our annual precipitation total so far — and the year isn’t quite halfway done.

Their drought is broken? But not ours?

I’m not going to challenge the gentleman’s assertion directly. Heck, for all I know the National Weather Service’s drought declarations for South Texas haven’t been as severe as they’ve been for much of the rest of the state.

But the drought surely is far from broken way up yonder, in the Texas Panhandle or all along the High Plains.

I will say this, however, about what we saw on our four-day excursion to Dodge City: The range land is remarkably green and lush. We didn’t see many playas on our travel north of Amarillo, through the Oklahoma Panhandle and into western Kansas.

But the ground looked gorgeous.

Is our drought broken? Hardly.

I hope our acquaintance from McAllen is correct about the drought condition in his part of the state. I’m a bit skeptical, but only because the drought hung for so long and it might take a bit longer for it to be declared a thing of the past.

Meanwhile, we could use some more rain to keep our grassland so green.