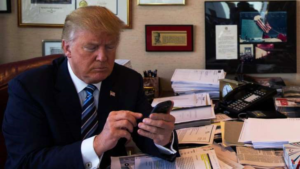 The guy he has hired to represent him in this “Russia thing” investigation has done something that, according to an ethics counsel who worked for President George W. Bush, should qualify him for disbarment.

Trump’s personal lawyer, John Dowd, allegedly wrote this in a tweet: I had to fire General Flynn because he lied to the Vice President and the FBI. He has pled guilty to those lies. It is a shame because his actions during the transition were lawful. There was nothing to hide!

What’s in play here? The lawyer supposedly wrote a tweet that contradicts something Trump had said earlier, that he fired former national security adviser Michael Flynn for lying to the vice president. He made no mention earlier of his lying to the FBI.

Now it’s Richard Painter, who served President Bush as ethics lawyer, who has weighed in. Painter, no friend of Donald Trump, wrote: “A lawyer who writes a tweet like that incriminating a client should be disbarred. He can tell (special counsel Robert) Mueller he wrote it.”

Of course, this all presumes that Dowd actually wrote the tweet. I am just going to state up front that I don’t believe that Dowd wrote it. Painter is likely correct to presume that a lawyer who would actually send something like into universe isn’t smart enough to operate under a law license.

I don’t know the first thing about John Dowd, but I am going to make an assumption that he’s probably alert enough to avoid something so stupid.

What still might need explaining, though — if Dowd didn’t write the tweet — is why he would fall on the grenade in the first place.

Taking the fall for doing something he might not have done is pretty stupid, too.

But if he did … then why in the name of presidential stupidity would Donald Trump allow someone else to use his Twitter account to incriminate him? 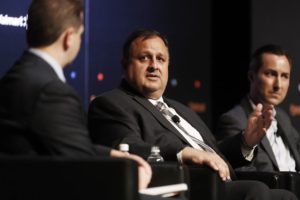 You have Robert Mueller, Stephen Bannon, James Comey, Sean Spicer, Michael Flynn and perhaps Don Trump Jr. standing by to give the Big Man a serious case of heartburn.

Walter Shaub is no slouch in the “worst nightmare” department, though. The former head of the U.S. Office of Government Ethics, took part in a Texas Tribune discussion to talk about government ethics, which in Shaub’s mind is no oxymoron.

He quit his job at OGE out of frustration dealing with the Trump administration.

As the Tribune reports: The last straw for Shaub, who is now with an organization called the Campaign Legal Center, was having to fight for a month to get basic ethics records that did not even turn out to be useful.

In general, Shaub said, Trump’s actions represent a “significant departure” from “ethical norms.” He added that it will be on the next president to repair the damage that’s been done.

“I put up as good of a fight as I could,” said Schaub, who resigned in July.

I continue to believe that the president’s lack of understanding of government has contributed to the ethical morass he has helped create. Trump’s business background simply is not well-suited to adapt to the complexities associated with service in the massive federal government.

Another panelist at the Tribune event, Richard Painter, former ethics lawyer for President George W. Bush, also has been a harsh critic of Trump. According to the Tribune: “People voted for Donald Trump to be a president … not to be a king,” he said. “He’s gotta respect the Constitution or he’s not gonna keep his job.”

There might lie the greatest problem facing Trump as he seeks to shake loose from the crises that are gripping his administration. He doesn’t know — or seemingly want to know — how the Constitution works, how it limits his power and how it sets forth “checks and balances” on presidential overreach.

One such overreach might involve Mueller, the special counsel assigned to investigate the Trump campaign’s alleged ties to the Russian government. As the Tribune reports: “The biggest threat we’re facing is any threat to Bob Mueller being fired,” Shaub said. Should that happen, Shaub said he would take to the streets and that others should too.

Ethics, Mr. President, really do matter. They matter a great deal. Just listen — for once, sir — to these fellows. They know of which they speak. 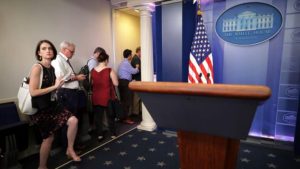 Richard Painter is emerging as one of my favorite pundits seen regularly when questions arise about the Trump administration.

Painter served as ethics lawyer/watchdog for President George W. Bush. Thus, he — more than likely — is a loyal Republican. He also is no fan of Donald John Trump Sr., which likely is why I appreciate his commentary so much.

Painter now teaches law at the University of Minnesota.

He recently commented on a statement from Trump senior adviser Kellyanne Conway, who suggested that the administration might administer lie-detector tests to aides in the hunt to determine who’s leaking information to the media.

Painter’s response via Twitter? “Kellyanne wants lie detectors in the White House? Try one on the press secretary podium. The place will light up like a disco!”

Press secretary Sarah Huckabee Sanders has pledged never to lie from the White House press podium. I would like very much to give her the benefit of the doubt.

However, maybe Sanders ought to follow Professor Painter’s suggestion: hook up to the polygraph machine — just to be sure.