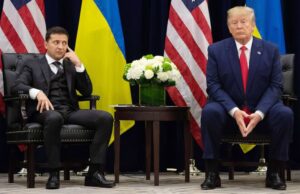 There you have it … from the acting director of national intelligence, Joseph Maguire.

The acting DNI told the U.S. House Intelligence Committee today that a whistleblower acted in “good faith” and has filed a “credible” complaint against Donald J. Trump, the White House and the Justice Department.

At issue is whether the president sought foreign government assistance in bringing down a political opponent. Trump and Ukrainian President Volodymyr Zellenskiy had this phone chat. Zellenskiy thanked Trump for helping the Ukrainians fight the Russian aggressors, but then Trump said he needed a favor “though” in exchange for continuing the assistance.

This is mighty serious stuff, folks. Congressional Democrats are enraged enough to launch a full impeachment inquiry against Trump.

The whistleblower’s complaint has been made public. In it he or she says that Trump sought foreign government assistance in undermining Joe Biden’s presidential candidacy. Moreover, the whistleblower has alleged, the White House sought to cover it up.

This individual bases the allegation on conversations with people close to the Oval Office. The whistleblower, naturally, has been attacked. Trump calls the individual a “political hack,” even though the president does not know the identity of who has leaked these allegations.

What’s more, Joseph Maguire, a career Navy SEAL and a decades-long public servant, has said the whistleblower acted appropriately, in good faith. He told Intelligence Committee members he finds the complaint to be “credible.”

The plot is thickening before our eyes.