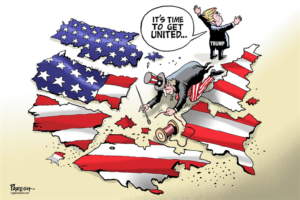 One of the unfortunate consequences of Donald Trump’s term as president has been the damage inflicted among loved ones.

Family members have become split between the pro-Trump and the anti-Trump wings. Not only that, but the anger generated on both sides of the divide has done great harm to relationships that are supposed to be immune from mere political differences.

My family has been spared much of that long term damage. I am an avid anti-Trumper. I have family members who are just as avid pro-Trumpers. They live far away. Therefore, we don’t see them regularly enough or even communicate with sufficient frequency to get wound up too tightly in political discussions.

I have heard plenty of anecdotes about family members clawing at each other — proverbially, of course — over these political differences.

We have crossed an important threshold, though. President Biden vowed to “unify” the country. He is having trouble unifying Democrats and Republicans in Congress, getting them to line up toward a single political goal. Perhaps the president can focus his unification effort on trying to mend fences between factions out here. It well might be that Joe Biden will be less toxic, less divisive, less vitriolic than the guy he defeated this past November.

Therefore, we might see some unity redevelop in households across the land. Or between extended family members who formerly hated each just because they supported Trump … or opposed Trump.

It would be my fervent hope that President Biden’s quest for unity can extend beyond the halls of power and into our living rooms and dining rooms.

Is that too much to ask? I think not. 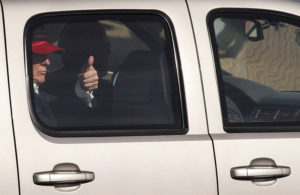 There once was a time when political unity spelled success for candidates who traded on it.

In 1968 and again in 1972, Democrats nominated candidates for president who sought to win with their party in shambles.

In 1976, Republicans nominated an incumbent president who had to fight for his political survival against an insurgent.

In every case mentioned here, the disunited party lost the election.

Is that going to happen in 2016? Those of us who’ve been proven wrong at almost every turn about the Republican primary campaign should hold our thoughts to ourselves.

Donald J. Trump says unity isn’t a prerequisite for him winning the election this fall. The Republican Party is ripping itself into pieces over this individual’s pending nomination for president.

Big deal, says Trump. He has a “mandate” to keep doing what he’s been doing, Trump says. According to the New York Times:

“Mr. Trump, in a telephone interview, compared his candidacy to hit Broadway shows and championship baseball teams, saying that success begot success and that he would be foolish to change his behavior now.

“’You win the pennant and now you’re in the World Series — you gonna change?’ Mr. Trump said. ‘People like the way I’m doing.’”

Still, he’s going to meet Thursday with House Speaker Paul Ryan and some other leading Republicans to talk about, oh, unifying the party.

I’ve become more of a political traditionalist as I’ve gotten older. I once worked real hard to elect the late Sen. George McGovern in 1972. It didn’t work out for us.

I now believe unity is better for the candidate than disunity.

Trump needs virtually all Republicans — and a lot of Democrats and independents — to vote for him if he intends to take the presidential oath next January. My own sense is that he’s still got a gigantic hill ahead of him.

Far more women view him unfavorably than favorably; same with Hispanics and African-Americans. He’ll need far more of them if he has a prayer against the Democratic nominee, who likely will be Hillary Clinton.

Does he obtain majorities with those key voting blocs by leading a divided, disjointed and dysfunctional Republican Party?

For the life of me, I don’t know how he does that.

Then again, I don’t know how this clown finds himself on the doorstep of a major-party presidential nomination.