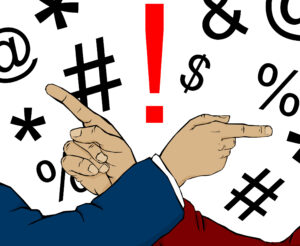 Has there ever been a presidential campaign — in the past century — that has evoked the kind of visceral anger between devotees of both major-party presidential candidates than this one?

They sides now are talking to each other. Trumpkins accuse Bidenistas of hating America. Reverse those accusations and we hear the Biden team suggesting that Trump’s side favors Russian interests over American interests.

Who is to blame for this?

Here it comes. I blame Donald John Trump fully, completely and without equivocation.

Trump has fomented this kind of anger with his own fiery rhetoric. His campaign launch in 2015 with a blistering attack on Latin American immigrants and continued with a call to ban all travel into the country from those who live in mostly Muslim countries.

It has hurtled downhill from there.

The nadir of Trump’s presidency might have been when he called Ku Klux Klansmen and Nazis “good people.” Hmm. My dear old Dad would have come totally unglued were he around to hear that one, given that he went to war in 1942 to fight those very Nazis.

The litany of divisive rhetoric is too lengthy to recount here. You know what I’m talking about. The consequence has been anger that has filtered into the ranks of those who adore Donald Trump and those who loathe him.

Joe Biden Jr. promises to heal the nation. He wants to restore our national “soul.” I pray that the American soul isn’t permanently damaged by the battering it has received during the tenure of the Donald Trump’s time as president.

Anger is not my thing.

Those who know me — I’m quite certain — would say I’m not an angry person. I see life as an adventure. The glass is half full. All that positive stuff.

I’m a bit dismayed, though, at the apparent anger among residents of the city my wife and I have called home for more than 20 years.

It manifested itself in the election this past weekend in which two incumbents were tossed off the City Council and the mayor was re-elected by a much smaller margin than he has in the past; some observers have told me that had Paul Harpole faced a serious opponent, he’d have been beaten, too.

* Our municipal tax rate is among the lowest in the state, so we aren’t pay “too much” for city services.

* We have an economic development corporation that is using sales tax revenue to lure business to the city. People gripe about the EDC using “our tax money” to bring in those “out of towners.” They fail to recognize that 60 percent of all sales tax revenue comes from folks who don’t live here.

The anger is palpable. Who feeds it? Has it splashed against us from the hysteria we hear in places like Washington, D.C., and Austin?

This new City Council is going to take office soon. It will have three new guys on board — with the third one being chosen from a runoff that’s occurring next month to fill a seat occupied by an appointment incumbent who didn’t seek election.

Let’s all settle down, fellas, and get to work for the common good.