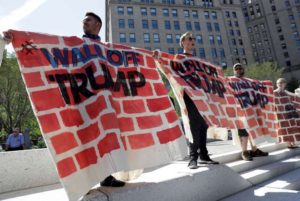 Donald J. Trump is doubling, tripling, maybe even quadrupling down on his anti-immigrant theme as he runs for president of the United States.

He told a rally in Portland, Maine this week that “legal immigrants” pose a potential threat to national security.

The Republican presidential nominee wasn’t satisfied just in calling for a ban on Muslims entering the country. He expanded it to include those who come from countries where terrorists are lurking (which is just about everywhere on Earth). Now he says even those who are here legally can pose a threat and, by golly, he wants to stop them before they kill somebody.

OK. Where does he stop?

He might consider going after, oh, every single American. That’s more than 300 million of us. Sure, the immigrant population has grown significantly in this country; it’s up to about 13 million immigrants now compared to 5 million in 1970, according to the Washington Post article attached to this post.

Do they pose the so-called existential threat to our national security? Are they more likely to commit terrorist acts than, say, your run-of-the-mill home-grown, corn-fed, good ol’ red-blooded American-born terrorists, such as, say, Timothy McVeigh? Do you remember Eric Rudolph? Hey, the U.S. Army psychiatrist who killed all those folks at Fort Hood on Nov. 5, 2009? His name is Nidal Hasan, but he’s an American-born fellow, too.

Trump went bonkers about a year ago when his presidential campaign started. Now, though, he’s talking about folks like my own grandparents. They’re all gone now.

But you know, come to think of it, two of them — my mother’s parents — came here from Turkey, where most people are practicing Muslims. If they were alive today, they might be on Donald Trump’s watch list.

Do you want a more graphic demonstration of how the war against international terrorism has changed the rules of engagement?

Try this: Texas lawmakers are gathering at Fort Hood this morning to present 40 Purple Hearts to active-duty service personnel who were wounded in a 2009 shooting on the sprawling Army post.

Army Major Nidal Hasan was convicted of murdering 13 people in the Nov. 5, 2009 rampage and has been sentenced to death for his crime.

This is a deserving honor for the individuals wounded in the attack. Given that the international war on terror — and Hasan clearly committed a terrorist act when he opened fire at Fort Hood — has redefined the “battlefield,” the individuals deserve the Purple Hearts.

As the Texas Tribune reported: “Federal authorities initially classified the incident as workplace violence, and victims and their supporters spent years trying to convince the government to call the act terrorism so they could qualify for the Purple Heart and benefits that come with it. Hasan has said he planned the attack as a way of protecting Muslim insurgents abroad.”

Several Texas officials plan to attend the ceremony this morning. One of them, U.S. Sen. Ted Cruz — an announced Republican presidential candidate — calls the award long overdue. “This attack was a clear act of radical Islamic terrorism, conducted on American soil — the original decision to designate it ‘workplace violence’ and deny these honors was a betrayal of the sacrifice of each of the victims,” Cruz said in a statement. “We can never undo the events of that day, but we can properly honor the courageous patriots who protect our nation and remain forever grateful for them.”

The government today will do the right thing by honoring those who wounded by Nidal Hasan.

Violence has erupted at Fort Hood yet again.

It’s early in the aftermath of the latest shooting rampage at the sprawling Army post in Central Texas.

Four people — including the gunman — are dead and many others are injured.

It was less than five years ago that Army Major Nadal Hasan opened fire on his fellow soldiers while protesting the Pentagon’s war policies in Afghanistan. Hasan, a psychiatrist and a devout Muslim, had been ordered to Afghanistan; he wouldn’t go, so he embarked on a senseless rampage. An Army court martial convicted him and sentenced him to death.

The nation’s heart breaks once again at this senseless shooting. President Obama vows to get to the bottom of what transpired. Joint Chiefs Chairman Martin Dempsey said the Pentagon’s main focus right now is to support the families of those who were killed or wounded.

Meanwhile, the simplest of questions arises from this tragic act. Why?

Nidal Hasan got a close shave this week, courtesy of the U.S. Army.

This wasn’t your ordinary grooming. Hasan is now getting set to serve a prison term while awaiting a death sentence for killing 13 people in that horrific massacre Nov. 5, 2009 at Fort Hood, Texas. Hasan also was a psychiatrist and was a commissioned officer in the Army.

Then he decided he didn’t want to report for duty in Afghanistan. Why? Because he opposed our military activities in that nation. Hasan, a devout Muslim, took matters into his own hands and committed a horrendous capital crime. He was court-martialed, convicted and sentenced to die.

But along the way, Major Hasan had refused the Army’s orders to shave his beard. He claimed he was entitled to grow the facial hair in observance of his religion.

That, of course, is an absolute pile of crap. He was entitled to nothing of the kind.

Hasan took an oath when he enlisted in the Army to obey lawful orders. One of them was that he couldn’t have facial hair. He defied the government he was serving by growing the beard.

Back in the old days, such as when I served in the very same Army as Nidal Hasan, such insubordination would result in what we used to call “dry shaving,” meaning that our sergeants could hold us down and shave our faces without shaving cream or even water.

Well, the major is now locked up. He’ll never be free again. The Army took matters into his own hands by shaving his face clean of the facial hair.

Religious freedom? Forget about it. He’s still in the Army and was ordered to shave his face. As he’s known all along, the U.S. Army isn’t a democratic institution. That’s why they call those directives “orders.”

U.S. Army officials are pondering whether a military court should sentence Nidal Hasan to death or life in prison for the 2011 murder of 13 people in that horrific Fort Hood massacre.

I’ve declared already my desire to sentence Hasan to life. A death sentence would give the Army major his wish, to be martyred as a practicing Muslim.

The military hasn’t executed anyone since 1961, when it hanged an Army private first class for the rape and attempted murder of an 11-year-old girl. Seems the military has trouble carrying out death sentences because, as NBC reports, the high command gets cold feet.

Politics will play a big part in Hasan’s sentence. He killed those people at Fort Hood to protest U.S. war efforts in Afghanistan.

Think for a moment of what would happen if the U.S. executes Hasan.

Fellow Muslim extremists around the world would shout praises to Allah for his death. They would declare it as some sort of moral victory over the Great Satan. They would hail Hasan as a hero; he won’t hear the cheers, but they wouldn’t be for his ears.

I keep thinking back to when U.S. commandos killed Osama bin Laden in that daring May 2011 raid in Pakistan. They took his body quickly out of the compound, flew his corpse offshore to the Navy nuclear aircraft carrier USS Carl Vinson. Then they conducted a brief ceremony and tossed bin Laden’s remains into the Indian Ocean. They had this plan all worked out in advance of the order to launch the raid and kill bin Laden.

Why did they do it? To prevent the creation of a shrine for Islamic extremists to worship their terrorist hero.

Keeping Nidal Hasan among the living would accomplish the same thing.

Nadal Hasan has been convicted of 13 counts of premeditated murder. The crimes entitle him to a death penalty … which he says he desires.

My admonition to the military court that convicted him is to sentence him to life in prison. And by life I mean “life,” as in for as long as that animal draws breath.

Hasan, a psychiatrist and a major in the U.S. Army, represented himself in a trial. He has acknowledged killing 13 people Nov. 5, 2009 in that horrific massacre at Fort Hood, Texas. He didn’t mount a defense when it came time to do so. The jury that heard the evidence offered by prosecutors deliberated and then came back with the guilty verdict — as if they needed any time to actually ponder the evidence.

Now comes the punishment phase. Hasan killed those people as part of an Islamic jihad. He is a Muslim extremist who did not want to serve in Afghanistan. Well, he got his wish by committing that dastardly deed.

He also wants to be martyred. Dying at the hands of the U.S. government would, in his demented mind, earn him martyr status. But not just his in own so-called mind. He also would become a martyr to other extremists around the world who would rejoice at the thought of this individual being put to death by the “Great Satan.”

Deny him that martyr status. Toss him into the darkest hole possible and let him serve his time with other unspeakably violent criminals.