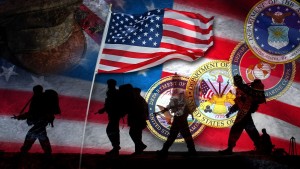 I’ve written before about my favorite veteran.

He was my late father, Peter John Kanelis, a proud veteran of the U.S. Navy who survived the horrifying crucible of World War II.

I wrote the first time about his service two years ago.

Dad saw the bulk of his combat in the Mediterranean Sea, engaging in the invasions of North Africa, Sicily and Italy. He endured relentless bombing and strafing by the Luftwaffe, had the ship on which he served sunk by an Italian dive bomber, and was credited with shooting down a Juncker JU-88 German bomber while manning a .50-caliber deck gun during the Sicilian campaign.

He told me of a time he was standing guard while on shore patrol in Tunisia and he shot to death someone who had breached his unit’s perimeter. Was it an enemy soldier? No, Dad said. It was a local guy who was in the wrong place at the wrong time.

Dad was like almost all World War II vets in this regard: He didn’t volunteer much about his experiences during that war. Oh, he’d talk about it if someone asked. And yes, I asked him about those days. We talked often while I was growing up.

I learned about how he joined the Navy just a few weeks after the attack on Pearl Harbor, how he went through an abbreviated boot camp in San Diego as the U.S. War Department sought to get mobilized in a hurry and how he learned his seamanship skills aboard ship while steaming to Great Britain.

Mom would tell me that Dad suffered for a time upon his return from the war from a form of shell shock — which they now call “post-traumatic stress disorder.”

It would manifest itself, Mom said, when Dad would hear the sound of an airplane. He’d flinch and look up, she said. All that constant bombardment made Dad quite jumpy when he heard the sound of aircraft overhead.

He got past that period of his life.

He intended to be join the Marine Corps the day he enlisted. As luck would have it, the USMC office was closed that day; he walked across the hall and joined the Navy. I believe he would have made as good a Marine as he was a sailor.

But to be honest, I’m grateful Dad was spared the task of potentially having to storm ashore amid a hail of enemy bullets.

His Navy duty was rough enough.

Dad’s been gone for 35 years. This much hasn’t dimmed one single bit as the nation prepares to commemorate Veterans Day: I’m as proud of my father’s service to his country now as I was when I first learned about it.

You’ve just heard the latest shot in the fight between congressional Republicans and the White House over a key budget matter.

Defense Secretary Chuck Hagel has announced a proposed Pentagon budget that, in his words, takes the United States off its “war footing” for the first time in more than a dozen years.

I want to make a couple of points:

One is that Hagel, a former Republican senator from Nebraska, is a combat veteran of the Vietnam War. As the liberal commentator Lawrence O’Donnell noted Monday night, it took a retired five-star general, Dwight Eisenhower, to coin the term “military-industry complex” in his farewell address to the nation as president of the United States. Ike understood the military better than most presidents. Hagel also understands the nation’s defense needs in this post-Cold War period.

Second is that even with the big cuts in defense spending, the United States still will spend more on defense than Russia, China and the United Kingdom combined.

The elimination of the A-10 Warthog close ground support jet is going to raise hackles. So will the reduction in surface ships for the Navy. Same with the elimination of the U-2 spy planes that will be replaced by unmanned drones. The Army will see its force reduced to 420,000 men and women.

Hagel’s point, though, is that the United States no longer will be fighting a war abroad but still will be able to respond to a future conflict while defending the homeland.

Our arsenal remains the most potent the world has ever seen.

The cuts will save the country billions of dollars over the short and the long terms, which is what fiscal conservatives say they prefer.

However, wait for it. The critics are going to declare that Hagel and the Obama administration are hell bent on disarming the United States in favor of domestic spending programs.

On this Veterans Day, I thought I’d pay tribute to someone who served his country with honor during its darkest moment.

I got the idea from a local radio station which on Monday is going to field phone calls from listeners talking about their “favorite veteran.” I’ll forgo that call and just write it here.

His name was Peter John Kanelis. He was my father. Dad was a proud World War II veteran.

He told me the story about how he found his way into the U.S. Navy.

Dad was anxious to get into the fight shortly after the Japanese navy and air force attacked our military installations at Pearl Harbor, Hawaii. That attack occurred on Dec. 7, 1941. Dad was enrolled at the University of Portland in Oregon, where he lived with my grandparents and his six siblings — two brothers and four sisters.

It was in February 1942 that he decided to enlist. He went downtown — to the Marine Corps office. The door was locked. He walked across the hall and enlisted in the Navy on the spot.

As I recall the way Dad told the story, he didn’t have to wait long before shipping out. He went to San Diego, Calif., for three weeks of basic training. The Navy then put him on a ship and he steamed for England. He would learn seamanship skills along the way.

Dad ended up serving in three combat campaigns in the Mediterranean theater: North Africa, Sicily and the Italian mainland. He fought hard. An Italian dive bomber blew up Dad’s ship during the battle for Sicily. He was picked up fairly quickly by a British ship.

It was during the Italian mainland invasion that Dad endured 105 consecutive days of aerial bombardment from the German Luftwaffe. He told me he lost a considerable amount of weight during that time, eating mainly fruit.

Dad continued his service for the next several weeks as the Allies fought to secure Italy. Then he came back to the United States for a time. He enrolled in an officer training program at Dartmouth College, but didn’t make the cut.

He then was shipped to the Philippines, where he was staging for a likely invasion of Japan.

President Harry Truman then ordered the dropping of the atomic bombs in Hiroshima and Nagasaki.

The war ended. Dad came home, married my mother and I came along three years later. My sisters would round out our family eventually.

Dad died much too early in his life. He was just 59 when he perished 33 years ago in a boating accident. Mom fell victim to Alzheimer’s disease; she was just 61 when she died four years later.

Dad’s service during World War II was not uniquely heroic. He merely did what millions of other Americans did. He answered the call to service when his country needed him. Those of us who came along owe everything to the 16 million young men and women who served during that horrible time.

My father was one of them. That’s why he is my favorite veteran.