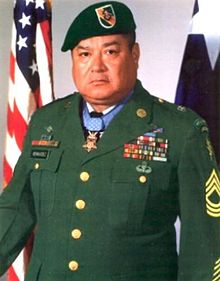 Fort Hood’s name has come under fire — no pun intended — in the wake of the nation’s recent awakening over the identity of public institutions and the display of monuments that “honor” Confederate traitors to the nation.

Fort Hood is one such place. Its name belongs to John Bell Hood, a Confederate officer who was among those who betrayed the nation. As Texas Monthly points out, though, not only was Hood a traitor, he was a lousy field commander. His recklessness on the battlefield reportedly led to the fall of Atlanta, Ga., during the Civil War.

So we have chosen to put this guy’s name on an Army post.

TM suggests the name of Roy Benavidez, a Vietnam War Medal of Honor recipient and a legitimate hero. And a Texan to boot!

Benavidez was born near Cuero. His parents died when he was a boy. He volunteered for the Army, qualified as a Green Beret, served in Vietnam as an adviser to South Vietnamese troops. After being injured badly during his first combat tour, Benavidez went back for a second tour and served with valor.

As Texas Monthly notes: So, Texas, it’s up to you. Do we continue to honor a Texan of convenience who fought ineptly against the United States government in defense of slavery, or choose instead to bestow those garlands on a native-born son of the Coastal Bend, who, in the Army’s own words, through “fearless personal leadership, tenacious devotion to duty, and extremely valorous actions in the face of overwhelming odds” epitomized “the highest traditions of the military service, and reflect the utmost credit on him and the United States Army”?

This is not a close call. 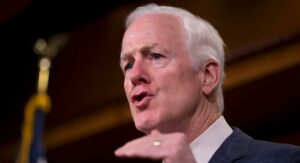 U.S. Sen. John Cornyn, a Texas Republican and the senior senator from this state, is now “open” to the possibility of changing the names of U.S. military posts that contain the names of Confederate traitors against the nation.

He formerly opposed it. Now he’s willing to study it along with members of both parties in the Senate.

“I realize these are contentious issues,” he continued. “What I don’t want us to do is to try to erase our history because, frankly, if you forget your history, you’re condemned to relive it.”

Look, there is no need to “erase our history” by removing the names. Just put those names in the proper museums, allowing our children to study them and to understand what they did to have their names eliminated from those military installations.

For the record, what they did was declare war against the United States, fight for the Confederate States of America, inflict hundreds of thousands of casualties on American warriors. And for what purpose? To allow states to keep human beings in bondage as slaves.

Lesson over. Take the names down.

I hope Sen. Cornyn’s views on the subject continue to evolve in the right direction. 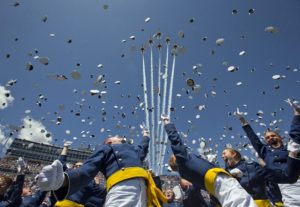 Today was a terrible day for members of three of our nation’s armed forces.

First, a member of the U.S. Air Force Thunderbirds crashed moments after taking part in a graduation ceremony flyover at the Air Force Academy in Colorado Springs.

The pilot managed to eject from the F-16 before it crash landed; happily, the pilot is OK. He managed a brief meeting later with President Obama, who was among those attending the ceremony; the president had given the commencement address.

Then it got much worse.

A U.S. Navy Blue Angels FA-18 jet crashed on a training mission in Tennessee. That pilot died in the crash.

Three U.S. Army soldiers died when their truck got caught up in floodwaters near Fort Hood, Texas. Six more soldiers are missing in that tragic event.

I mention this to call attention to the sacrifice that can occur even when our young men and women aren’t thrust into combat.

Our hearts break for the families of those who were lost today. I hope they know their nation grieves for them.

Do you want a more graphic demonstration of how the war against international terrorism has changed the rules of engagement?

Try this: Texas lawmakers are gathering at Fort Hood this morning to present 40 Purple Hearts to active-duty service personnel who were wounded in a 2009 shooting on the sprawling Army post.

Army Major Nidal Hasan was convicted of murdering 13 people in the Nov. 5, 2009 rampage and has been sentenced to death for his crime.

This is a deserving honor for the individuals wounded in the attack. Given that the international war on terror — and Hasan clearly committed a terrorist act when he opened fire at Fort Hood — has redefined the “battlefield,” the individuals deserve the Purple Hearts.

As the Texas Tribune reported: “Federal authorities initially classified the incident as workplace violence, and victims and their supporters spent years trying to convince the government to call the act terrorism so they could qualify for the Purple Heart and benefits that come with it. Hasan has said he planned the attack as a way of protecting Muslim insurgents abroad.”

Several Texas officials plan to attend the ceremony this morning. One of them, U.S. Sen. Ted Cruz — an announced Republican presidential candidate — calls the award long overdue. “This attack was a clear act of radical Islamic terrorism, conducted on American soil — the original decision to designate it ‘workplace violence’ and deny these honors was a betrayal of the sacrifice of each of the victims,” Cruz said in a statement. “We can never undo the events of that day, but we can properly honor the courageous patriots who protect our nation and remain forever grateful for them.”

The government today will do the right thing by honoring those who wounded by Nidal Hasan.

Violence has erupted at Fort Hood yet again.

It’s early in the aftermath of the latest shooting rampage at the sprawling Army post in Central Texas.

Four people — including the gunman — are dead and many others are injured.

It was less than five years ago that Army Major Nadal Hasan opened fire on his fellow soldiers while protesting the Pentagon’s war policies in Afghanistan. Hasan, a psychiatrist and a devout Muslim, had been ordered to Afghanistan; he wouldn’t go, so he embarked on a senseless rampage. An Army court martial convicted him and sentenced him to death.

The nation’s heart breaks once again at this senseless shooting. President Obama vows to get to the bottom of what transpired. Joint Chiefs Chairman Martin Dempsey said the Pentagon’s main focus right now is to support the families of those who were killed or wounded.

Meanwhile, the simplest of questions arises from this tragic act. Why?

Nadal Hasan has been convicted of 13 counts of premeditated murder. The crimes entitle him to a death penalty … which he says he desires.

My admonition to the military court that convicted him is to sentence him to life in prison. And by life I mean “life,” as in for as long as that animal draws breath.

Hasan, a psychiatrist and a major in the U.S. Army, represented himself in a trial. He has acknowledged killing 13 people Nov. 5, 2009 in that horrific massacre at Fort Hood, Texas. He didn’t mount a defense when it came time to do so. The jury that heard the evidence offered by prosecutors deliberated and then came back with the guilty verdict — as if they needed any time to actually ponder the evidence.

Now comes the punishment phase. Hasan killed those people as part of an Islamic jihad. He is a Muslim extremist who did not want to serve in Afghanistan. Well, he got his wish by committing that dastardly deed.

He also wants to be martyred. Dying at the hands of the U.S. government would, in his demented mind, earn him martyr status. But not just his in own so-called mind. He also would become a martyr to other extremists around the world who would rejoice at the thought of this individual being put to death by the “Great Satan.”

Deny him that martyr status. Toss him into the darkest hole possible and let him serve his time with other unspeakably violent criminals.