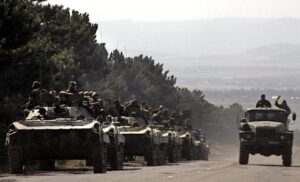 Our world is full of too many warmongers who either have no appreciation of the brutality of war’s insanity or who — to put it bluntly — just don’t a crap about any of it.

Count me as one who (a) does appreciate the brutality of war and (b) gives a serious crap about its consequences.

Russian troops and tanks are battling with Ukrainian troops and tanks over who should run Ukraine, an independent nation that borders Russia and much of the rest of eastern Europe. I am baffled to the max over criticism from the far right over President Biden’s response to the unprovoked Russian invasion of Ukraine.

For my money — and this is just me speaking — I believe the president has reacted appropriately. And yet there are those who say we should “do more” to defend Ukraine. That would be what, precisely? Send in the jet fighters? Join in defending a no-fly zone over much of Ukraine, which I should add is an act of war all by itself? Send in the thousands of troops we have deployed to Poland to fight the Russians hand to hand?

The array of economic sanctions this country has imposed on Russia will deliver serious pain to the strongman Vladimir Putin and his oligarch pals and allies. We have essentially choked off Russia from the rest of the Free World’s banking system. Joe Biden has declared there will be no Russian aircraft allowed in U.S. airspace. Our allies in western Europe have shut off the fossil fuel pipeline from Russia; yes, we already are paying the price for that with increasing energy prices.

The Russians have a lot of very deadly weapons in stock. We do, too. We aren’t going to use them on the Russians, nor will they use them on us. The “mutually assured destruction” policy has been dredged up and returned to the top shelf, as it would be pure MADness to start hurling nukes at each other.

The warmongers out there need to take a breather and let these economic sanctions play out. They’re already bringing plenty of pain to Putin and his cabal of thugs.

There needs to be a universal understanding of what is transpiring in Ukraine. Stay with me, as I will say this slowly and clearly: Vladimir Putin has attacked a sovereign country on Russia’s western border and is seeking to bring Ukrainians under Russian control; therefore, Vladimir Putin is the aggressor in this conflict.

OK. Are we clear on that?

What, then, in this world of ours is preventing some Americans — and some others around the world — from recognizing what is plainly obvious?

Some right-wing media nut jobs in the U.S.A. are suggesting out loud and in plain English that Ukraine has invited this naked aggression. By doing what, precisely? By, um, cozying up to its European neighbors? By suggesting it might want to join another treaty organization, such as, NATO?

Vladimir Putin’s flagrant assault on Ukraine is without a shred of merit.

The Russian dictator has lamented the end of the Soviet Union, calling it a dark day in history. He wants the USSR restored. I fear greatly he has re-started the Cold War with the United States and the rest of the “free world.”

He blusters about possessing those nukes and his top aides have threatened to use them if anyone interferes in this fight with Ukraine.

I now will remind Putin of the term with which I am certain he is familiar. That term is MAD, an acronym for “mutually assured destruction.” The United States has nukes, too, and the superpowers’ possession of those massive weapons kept them from destroying themselves and the rest of the world.

Putin’s aggression has brought us all — perhaps — to the brink of MADness once again.

I always thought the United States and its allies won the Cold War, that we forced the Soviet Union to spend beyond its means on a military machine, bankrupting the country.

The USSR collapsed under its own weight. The Reagan administration sought prior to its demise to negotiate a deal to limit the production of nuclear weapons.

Four presidents came and went, the treaty was kept in place. The United States and Russia whittled their respective nuclear arsenals.

Now comes Donald Trump to assert that the Russians haven’t been faithful to the treaty. So he’s going to trash it. Then he announces a proposed buildup of nuclear weapons. The Russians counter with a threat to rebuild their own nuclear arsenal in response to the U.S. threat.

It’s a dangerous course upon which the president is embarking. Instead of deploying diplomats and weapons inspectors to determine the extent to which Russia “violated” any agreement, Trump wants to flex our nation’s military muscles.

I know this seems to piddle all over the notion that the president is somehow beholden to Russia and its leader, Vladimir Putin. To the extent that he’s holding Russia accountable for its actions in this context, I applaud the president’s rhetorical aggressiveness; if only he would use the same approach to dealing with Russian attack on our 2016 presidential election.

But are we now going to restart the arms race that produced a policy called Mutually Assured Destruction?

I want to concur with much of the analysis offered in the wake of the “false alarm” caused by an inadvertent alert of a bogus missile strike that was heading toward one of our United States.

A lot of folks are asking a simple question: It’s bad enough that someone supposedly “pushed the wrong button” during a shift change at a security post, but why did it take 38 whole minutes to tell Hawaii residents that what they thought was impending doom was in fact a mistake?

Thirty-eight minutes! For more than a half-hour, Hawaii residents were left to wonder if someone had launched an intercontinental ballistic missile at them. Was it, oh, North Korea? Was it the Russians? Did the Chinese do it?

For 38 minutes, 1.5 million Americans were scrambling to find a way to cope with a potential nuclear holocaust.

How in the name of Mutually Assured Destruction does that occur?

And what in MAD’s name can we do to prevent it from ever happening again?

We’re waiting for some answers. Anyone? 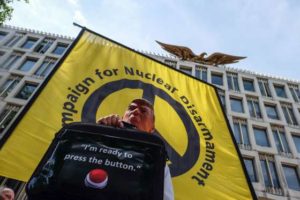 The United States of America has followed a nuclear policy that, so far, has worked pretty well.

Thus, is it possible for the United States to get North Korea to toss its budding nuclear stockpile into the crapper? Hardly.

Which brings me to one of Kim Jong Un’s demands: He wants to keep his nuclear arsenal. USA Today’s list of five demands contains this one, which might be central to the current tensions that have escalated between the United States and North Korea.

You’ve heard of “mutually assured destruction,” aka MAD. It kept the United States and the Soviet Union from nuking each other during the Cold War. The world is full of trouble spots occupied by nuclear-powered nations: India and Pakistan; Israel has them, too; South Africa has been thought to possess nuclear weapons.

Yes, we negotiated an agreement designed to rid Iran of its nuclear weapon capability and the jury is still out on whether that will work ultimately.

North Korea presents a tremendously different situation for us. Donald Trump is blustering, bellowing and bloviating about what he intends to do if Kim’s regime keeps making “overt threats” against the United States and our allies. A “threat” doesn’t constitute military action, so the president is treading on some highly dangerous ground if he intends to hit the North Korean’s first.

My advice to the president — which he won’t ever see, let alone heed — would be to dial back the fiery and furious rhetoric and possibly accept the notion that North Koreans are going to do what they intend to do, no matter how many threats we level against them.

However, the commander in chief can make it known — through back channels — what Kim knows already: Don’t even think about using those nukes. 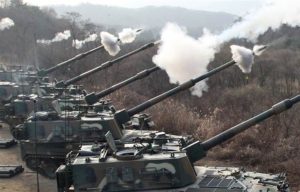 Kim Jong Un certainly must know why they called it “mutually assured destruction” back during the Cold War.

Surely he understands that MAD means what it assures, that anyone who launches a nuclear missile at a nuclear power is going to get wiped off the face of the planet.

The MAD policy prevented a nuclear holocaust when the world comprised just two superpowers. U.S. presidents and Soviet dictators knew the consequences of such foolishness.

But … here we are. The North Korean dictator/fruitcake/goofball keeps making some, oh, so very provocative statements about how he would respond to U.S. attempts to prevent him from developing a nuclear-strike capability.

Kim Jong Un said he would launch a missile at the USS Carl Vinson carrier battle group that is steaming (finally!) toward the Korean Peninsula. He keeps arguing that his nukes are for “defensive purposes only,” meant to deter some perceived aggression from South Korea.

It’s all just so much MADness coming out of the mouth of the son and grandson of two prior North Korean dictators.

This brings me to my point. All the bluster and bravado that pours out of Kim Jong Un’s pie hole cannot actually mean he would he do what he says he would do. Or can it?

Military rivalries are nothing to trifle with. I recall vividly a statement I received from a Taiwanese government official with whom I was discussing the tense standoff that exists between Taiwan and the People’s Republic of China.

The PRC has long threatened to use military force to “take back” the island nation formed in 1949 at the end of a bloody civil war on the Chinese mainland. Would the PRC actually risk nuclear confrontation with the United States, which has a mutual defense treaty with Taiwan?

The Taiwanese official said his government takes any threat from China “very seriously” and was prepared to respond accordingly.

So should the United States be prepared to respond to the rantings of the North Korean MADman.

They call it “MAD” for a damn good reason, Mr. Dictator.