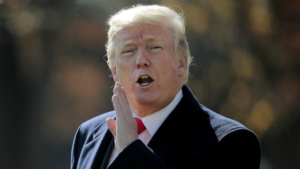 Do you think he would call attention to specific groups of Americans who have been disproportionately affected by this disease? Gay people? Or people of color? Oh, no! He didn’t go there.

The president broke with decades of tradition by failing to mention the LGBT community, or racial minorities, or poor people in declaring his intention rid the world of this terrible disease.

“Today, on World AIDS Day, we honor those who have lost their lives to AIDS, we celebrate the remarkable progress we have made in combatting this disease, and we reaffirm our ongoing commitment to end AIDS as a public health threat,” Trump said.

I learned a hard truth while attending the International Conference on AIDS in 2004 in Bangkok, Thailand. It is that the disease has spread far beyond where it began in the early 1980s, when it was killing primarily gay men. It now affects sex workers and the spouses of men who become affected with HIV/AIDS through unprotected sex with women who are infected with the virus.

The president made no mention of those groups while making his declaration.

As The Hill reported: Scott Schoettes, a project director at the legal advocacy group Lambda Legal criticized the proclamation in a statement to BuzzFeed.

Here again, I am saddened to say, is another example of the president feeling queasy about talking to — or about — constituency groups that opposed his election and who continue to oppose his policies.

A politician who pledges to be a president for “all Americans” should be able to summon the rhetoric that speaks to everyone’s particular concerns. Once again, the president has failed to speak to the entire country. 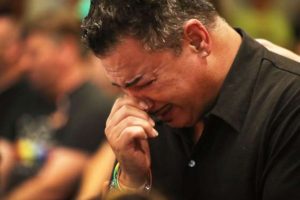 As investigators sort through the carnage at that Orlando, Fla., nightclub where Omar Mateen opened fire with his AR-15, politicians, police and pundits are wondering whether Mateen committed a hate crime or an act of terror.

I keep asking myself: What is the difference?

Suppose the shooter killed those 50 people at a grocery store, or a shopping mall. Did he hate his victims? Would he have committed a hateful act? Yes.

We’re trying to parse the language a bit too finely, it seems to me.

The massacre occurred at a club called Pulse, a popular hangout for Orlando’s gay community. Mateen supposedly saw two men engaging in a public display of affection. It set him off, according to his father. He hated what he witnessed and was intent on acting on that hatred.

What if Mateen, the son of Afghan parents and a Muslim, had declared himself in league with the Islamic State and then committed an act of radical Islamic terrorism? Police say he called 9-1-1 and told the dispatcher he had pledged allegiance to ISIS. He hated his victims just much in that context as he would have hated them merely because of their sexual orientation.

Terrorists are haters. They hate the society against which they are striking out. By extension, they hate the victims they injure and kill.

Whether they target victims for specific causes, or just to terrorize them, they are haters.

I’m still trying to grasp the gravity of what happened early this morning as they were issuing a last-call advisory at that nightclub.

I believe Mateen committed an act of terror. He also was filled with rage and hatred. Let’s avoid separating the motives. They are linked by the level of their evil intent. 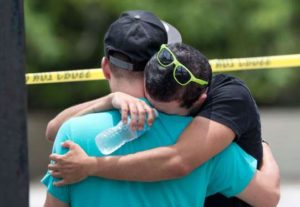 It doesn’t matter to me in the least — in this moment of profound grief and shock — what precisely motivated Omar Mateen to do what he did early this morning in Orlando, Fla.

He committed a terrorist act.

Mateen was a 29-year-old American who decided to open fire with an AR-15 at a gay night club in Orlando. Fifty people are dead — so far; several of the injured are in critical condition. This madman committed the worst such mass murder in American history.

He has terrorized an entire city. Orlando has been shaken to its core. Mateen died in the melee, which of course deprives authorities of the chance to question the perp about why he committed this dastardly act.

Mateen has completed successfully a singular mission, which was to frighten a community. That, by itself, is the definition of a terrorist.

We’ll get to the truth eventually as to what motivated this monster. He reportedly proclaimed some allegiance the Islamic State; he might have been an ISIS agent, or he might have what’s been called a “lone wolf.”

Perhaps the biggest puzzle to solve will be this: How did this guy, who was on an FBI/Homeland Security “watch list” manage to continue to move about freely — and arm himself with an AR-15?

We’ll get these answers in due course.

Meantime, let’s all say it together: An American community has been struck by an act of terrorism.

Arkansas Gov. Asa Hutchinson is a smart politician, and I don’t say that intending to be snarky.

His state’s lawmakers sent him a bill that looks like the Indiana Religious Freedom Restoration Act — the one that caused all that furor. What did Hutchinson do? He sent it back to the legislature and told lawmakers to rework the bill to ensure it doesn’t encourage discrimination against gays and lesbians.

If only Indiana Gov. Mike Pence had dialed in his own radar when he got the bill that he signed into law.

RFRA is intended to protect business owners from being sued for denying service to gays and lesbians. It is seen, though, as a license for business owners to discriminate against the LGBT community. The uproar has been furious.

Hutchinson heard the fury all the way down in Little Rock. His view is that the Arkansas bill needs to reflect the 1993 federal law signed by President Clinton that protects the rights of all citizens and disallows business owners from discriminating against anyone.

“My responsibility is to speak out on my own convictions and to do what I can as governor to make sure that this bill reflects the people of Arkansas, protects those of religious conscience, but also minimizes the chance of discrimination in the workplace and in the public environment,” Hutchinson said.

This debate has raged now for several days and it likely will continue to rage until the Indiana legislature does what Gov. Pence has requested, which is to rework it to protect all citizens’ rights. As for the Arkansas bill, Gov. Hutchinson took the advice of his son, Seth, who informed his father that he signed a petition urging Dad to veto the bill as it was presented to him initially.

Sons usually are told to listen to their fathers. In this case, Dad did the listening — as he should.

“So who needs a religious freedom law anyway. Last time I checked, you could go to any church you want. You can even go to one where they wave snakes around if that’s your thing. Or you don’t have to go to any of ’em. You can go to a mosque, a synagogue, a cathedral, a tarpaper shack. Or you can stay home and watch re-runs on MeTV. Ain’t nobody need no law on religious freedom. Oh, but if you’re in business, you don’t have a right to discriminate. Religion stops when you invite the public to your door. Got it?”

Indiana Gov. Mike Pence has been taking it on the chin since signing the bill into law. He’s now seeking to amend it to ensure that businesses cannot discriminate against someone because of their sexual orientation.

It’s the sexual orientation element that’s gotten so many folks riled up.

The stated intent is to protect people’s religious principles. The effect in the eyes of critics has been that the law now gives business owners license to discriminate against gay individuals or same-sex couples.

Gov. Pence has been on the defensive ever since signing the bill. He’s now seeking to fix the law and I give him credit for recognizing the need to protect his state’s residents from undue — and illegal — discrimination.

I won’t question his motives for seeking to change the law. I do feel the need to point out that Gov. Pence is considering a run for the Republican nomination for president of the United States.

Indiana seems like a nice enough place, with nice people motivated to do nice things to and for others.

Why, then, does the state’s legislature send to Gov. Mike Pence a bill that allows people to possibly concoct a religious belief in order to discriminate against others?

Pence this past week signed the Religious Freedom Restoration Act, which prevents someone from suing, say, a business owner from doing business with you based on the business owner’s religious beliefs.

Pay attention here: The bill is aimed squarely at gays and lesbian who could be denied service from those business owners.

Reaction to this law has been furious. Business owners across the nation have declared their intention to cease doing business in Indiana as long as the state sanctions discrimination against their employees. With the NCAA Men’s Basketball Final Four tournament set to be played in Indianapolis, there could be a serious backlash that inhibits the money the state hopes to earn.

This law looks for all the world — to me at least — as if the state is using “religious freedom” as a shield to protect those who wantonly discriminate against those who have a certain sexual orientation.

Imagine a couple wanting, say, to buy a home. Can a lender refuse to loan the couple the money to buy the home simply by pulling the “religious freedom” statute out of thin air — or out of some bodily orifice, for that matter? The law, as I understand it, prohibits the gay couple from suing the lender because the law protects the lender from being hassled over his or her religious beliefs.

The appearance of using religious liberty and freedom as a pretext to allow overt discrimination is a disgrace.