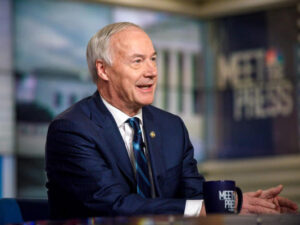 Asa Hutchinson has just become persona non grata in the cult-following world of Donald J. Trump. Why? Because the Republican Arkansas governor spoke the blunt truth about Trump’s ability to lead his party, let alone to become president of the United States of America.

God forbid the latter from occurring.

Hutchinson leads the Republican Governors Association and he said this weekend that Trump is unfit for the office he once held. “I do not believe Trump is the one to lead our party and our country again, as president,” Hutchinson told Insider on the sidelines of the NGA Winter Meeting in Washington, DC.

He was responding, apparently, to a video that’s gone viral in which Trump declares himself to be the “45th and 47th president.” Good gawd.

Hutchinson now is likely to become a target of the Trump cultists/wackos/idiots who cling to the notion that the former Idiot in Chief is going to seek the highest office … yet again.

In truth, though, Gov. Hutchinson is speaking realistically about the absolute worthlessness that Donald Trump brings to any reasonable or rational debate that needs to occur.

Donald Trump should not lead the country again, says the Republican leader of the National Governors Association (msn.com)

His message will pass through the vacuous skulls of millions of Trumpkins, if you’ll pardon the pithy reference, like sh** through the proverbial goose.

Arkansas Gov. Asa Hutchinson is a smart politician, and I don’t say that intending to be snarky.

His state’s lawmakers sent him a bill that looks like the Indiana Religious Freedom Restoration Act — the one that caused all that furor. What did Hutchinson do? He sent it back to the legislature and told lawmakers to rework the bill to ensure it doesn’t encourage discrimination against gays and lesbians.

If only Indiana Gov. Mike Pence had dialed in his own radar when he got the bill that he signed into law.

RFRA is intended to protect business owners from being sued for denying service to gays and lesbians. It is seen, though, as a license for business owners to discriminate against the LGBT community. The uproar has been furious.

Hutchinson heard the fury all the way down in Little Rock. His view is that the Arkansas bill needs to reflect the 1993 federal law signed by President Clinton that protects the rights of all citizens and disallows business owners from discriminating against anyone.

“My responsibility is to speak out on my own convictions and to do what I can as governor to make sure that this bill reflects the people of Arkansas, protects those of religious conscience, but also minimizes the chance of discrimination in the workplace and in the public environment,” Hutchinson said.

This debate has raged now for several days and it likely will continue to rage until the Indiana legislature does what Gov. Pence has requested, which is to rework it to protect all citizens’ rights. As for the Arkansas bill, Gov. Hutchinson took the advice of his son, Seth, who informed his father that he signed a petition urging Dad to veto the bill as it was presented to him initially.

Sons usually are told to listen to their fathers. In this case, Dad did the listening — as he should.