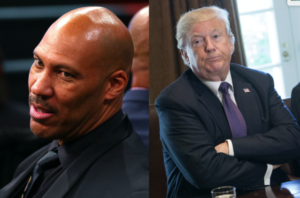 I’ll admit readily that I am not all that keen on pop culture personalities. I don’t keep up with them.

I’m actually a bit unclear whether LaVar Ball fits into that category of celebrity. But he’s intriguing me in a curious sort of way.

He’s the father of a professional basketball player, Lonzo Ball. His second-oldest son also is a pretty good basketball player who, until just the other day, was enrolled at UCLA; his name is LiAngelo Ball. There’s a third kid, too, who I reckon is going to play hoops for someone.

LaVar the Loudmouth thrust his name into the news, which I guess is his specialty, when LiAngelo and two UCLA teammates got caught shoplifting at a department store in China, where they were playing some non-conference games.

Chinese authorities were threatening to imprison the young men. Then Donald Trump intervened. He persuaded the commies to let the boys out. They came home. Daddy Ball got into a public beef with the president over whether he thanked the president sufficiently.

Back and forth they went.

Then LaVar pulled LiAngelo out of UCLA.

This is a case of someone hogging attention away from others. Imagine that. LaVar Ball and Donald Trump engaging in a man-to-man fight over who should bask in the spotlight.

So, what’s going to happen to LiAngelo? Is he going to play basketball for another college? As for Lonzo — who’s playing hoops for the Los Angeles Lakers, what does the future bode for him? What if he washes out? What is Daddy Ball going to do?

I’ll presume that LaVar loves his sons. He might think he’s doing them a big favor by cheering them on so loudly — and obnoxiously — from the front row.

However, the very idea that this guy — whose major talent seems to rival that of the Kardashians, Paris Hilton and the whole roster of Housewives of Wherever — is able to thrust himself into the public discussion speaks so very graphically about what has become of popular culture these days.

It seems that anyone can be a celebrity in the Social Media Age.

It’s come down to this: The president of the United States, the commander in chief of the world’s mightiest military machine, is waging a war of words/wits with a loudmouth father of sons who aspire to athletic greatness.

That’s right. Donald John Trump and LaVar Ball are going back and forth via Twitter.

This is how the Leader of the Free World chooses to spend some of his time. He calls Ball “an ungrateful fool” because Ball said the president didn’t do what he said he did to obtain the freedom of one of Ball’s sons, who got caught shoplifting in China.

The president has made a stupid feud even more stupid by his engaging this blowhard bozo in a Twitter feud.

I know the president is hopelessly addicted to Twitter. I won’t call on him to quit engaging in this kind of petulance. He’s acting like an overgrown, overhyped pubescent punk. He can’t help himself.

The man is diminishing the high office to which he was elected.

Don King without the hair? 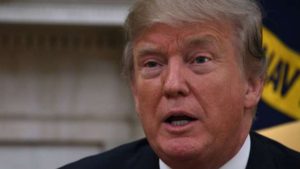 I wish I had thought of this, but since I didn’t I’ll deliver appropriate credit to the source of this piece of wisdom.

It comes from U.S. Rep. Adam Schiff, D-Calif., who fired off this tweet today about Donald J. Trump Sr.:

“The President would have left American students in a foreign jail because their families didn’t lavish sufficient praise on him. How can someone in such a big office be so small?”

What a great question, even though it’s more or less a rhetorical inquiry. Here’s another twist on it: How can Trump shrink the high office he won a year ago in one of those most stunning political upsets in U.S. history? I think it shrunk the very moment he took the oath of office.

The object of Schiff’s retort concerns the Twitter tussle that Trump entered with LaVar Ball, the father of one of three UCLA student/athletes who were charged with shoplifting at a high-end store in the People’s Republic of China.

Trump talked to Chinese leaders while visiting that country and reportedly persuaded them to release the young men instead of convicting them and sentencing them to potentially years-long prison sentences. LaVar Ball then tweeted that Trump didn’t do anything to obtain the release of his son and the other athletes.

Then the president decided to fire back at Ball — a man known for his big mouth and outsized public presence in the lives of his athletically gifted sons.

He said he “should have left them in jail” because LaVar Ball didn’t lavish enough praise on the president for his efforts.

That is one way a small man can occupy such a big office. Indeed, Trump is managing to shrink the office itself with his persistently petulant behavior.

Trump has turned this remarkable “skill” into an art form.

He has made LaVar Ball, the loudmouth “Little League father” of an NBA player and one of three UCLA students caught shoplifting in China, a (semi) sympathetic character.

LiAngelo Ball was one of the Bruin basketball players caught pilfering some goods at a high-end department store. The Chinese government tossed the boys into jail.

Then the president of the United States entered the picture and reportedly/allegedly finagled a deal to get the young men released and sent home; under Chinese law they faced a potentially lengthy prison sentence.

So, what does LaVar Ball do? He tweets something about Trump really not doing anything to help LiAngelo and his teammates.

Trump’s response? He tweeted back something about how ungrateful Daddy Ball is for what the president did to obtain the release of his son and his pals. The president tweeted this: Now that the three basketball players are out of China and saved from years in jail, LaVar Ball, the father of LiAngelo, is unaccepting of what I did for his son and that shoplifting is no big deal. I should have left them in jail!

There you go. Presidential dignity has taken a hike from 1600 Pennsylvania Ave. Try to imagine any of Trump’s predecessors engaging in this kind of petulant pettiness.

Do not misunderstand me: Daddy Ball is far from a sympathetic character. He’s brash, brazen and bellicose. He earned his 15 minutes of fame through some kind of “reality TV” gig — that I have never seen. He has produced some sons with decent athletic skill and he’s trading on their prowess to advance his own agenda … whatever the hell it is!

As for the president, I have quit wondering whether Trump will outgrow his Twitter fetish and whether he’ll ever learn to stick to matters of statecraft and high-level diplomacy.