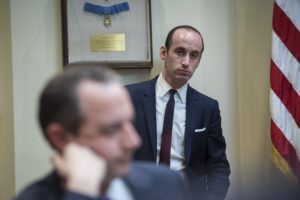 Amid the chaos and confusion that continues to swirl through the White House, Americans are being “treated” — if you don’t mind my use of that verb — with an example of ignorance of how our federal government is supposed to work.

The rhetoric of a young firebrand working inside the Trump administration offers a classic case in point.

Stephen Miller — a senior policy adviser — was trotted out this past weekend on the news talk shows in which he declared that “unelected judges” have no business deciding matters that come before them. He said that U.S. District Judge James Robart must not “make laws” in determining that Donald Trump’s ban on refugees coming to this country needs further review; he said the same thing about the federal appellate court judges, the 9th U.S. Circuit, who upheld Judge Robart’s decision.

The founders created a government that entitles those judges to do precisely what they did. The president’s ruling bars refugees coming here from Muslim-majority countries. It, in effect, discriminates against people on the basis of their religion. Trump says he wants to protect Americans against “radical Islamic terrorists.” Of course, the ban doesn’t necessarily cover blond, blue-eyed Europeans who well might have been recruited by terrorist organizations to do the very thing we all want to prevent.

Miller, it should be noted, helped write Trump’s Republican presidential nomination acceptance speech this past summer in which the nominee said “I alone can fix” what ails the nation.

Actually, this isn’t a one-man game.

The Washington Post published a fascinating profile of Miller.

But my essential point is that Trump — who is facing a mountainous pile of potential crises so early in his administration — needs to grasp the notion that governance is a complicated process. It involves a complex set of machinery that is intended to limit the power of one man, or one branch of government. They are “co-equal branches of government” for precisely that reason.

Add to all of that the pandemonium that has erupted over the resignation of the national security adviser and questions about whether he and others in the administration covered up improper contacts with Russian intelligence officials, and you have a prescription for unmitigated disaster.

“Unelected judges” are part of the process, young Mr. Miller. If the boss is going to continue to shoot first and aim later with executive orders and tweets, then all of them had better get used to more of what the courts have delivered.

I have to share with you a column I saw this morning from Leonard Pitts Jr., a Pulitzer Prize-winning essayist, who takes the president down hard.

Pitts is angry with the what he calls Trump’s “so-called presidency.”

Pitts can turn a phrase … or two.

He has done so with great precision here. 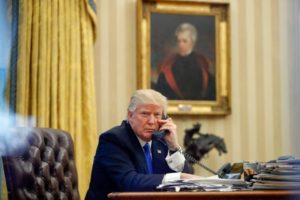 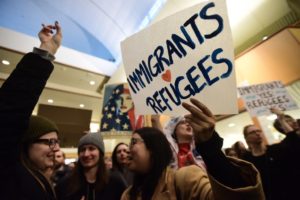 Here is where we stand regarding that ill-considered ban on refugees.

It appears headed for the U.S. Supreme Court, thanks to a unanimous ruling this afternoon by the 9th U.S. Circuit Court of Appeals, which upheld a lower court’s suspension of Donald Trump’s executive order banning refugees from seven Muslim-majority countries from entering the United States.

The 9th Court ruled 3-0 to uphold the suspension ordered by U.S. District Judge James Robart, whom Trump called a “so-called judge” in criticizing his decision.

What about the politics of the court? Judge Robart is a George W. Bush appointee; the three appellate court judges were picked by Presidents Carter, Bush 43 and Obama. It looks like a bipartisan rejection to me.

Now the highest court stands ready to ponder this controversial executive order. It has a vacancy, meaning that eight justices are on the job. Four conservatives and four liberals. What happens if the Supremes issue a tie vote? The 9th Court ruling stands. Trump’s executive order is negated.

The 9th Court ruling takes aim at the provision in the order that bars people with visas from re-entering the United States, which the judges ruled is unconstitutional.

According to The Associated Press: “The appeals panel said the government presented no evidence to explain the urgent need for the executive order to take effect immediately. The judges noted compelling public interests on both sides.

“‘On the one hand, the public has a powerful interest in national security and in the ability of an elected president to enact policies. And on the other, the public also has an interest in free flow of travel, in avoiding separation of families, and in freedom from discrimination.'”

Washington Gov. Jay Inslee, a Democrat, whose state has sued the president over his executive order, responded: “Mr. President, we just saw you in court, and we beat you.”

The fight has just begun. 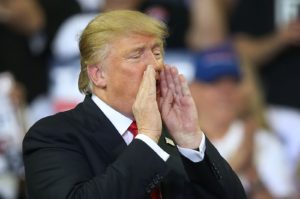 Donald J. Trump’s fight with the federal judiciary could be shaping up to be a donnybrook.

The president instituted a temporary restriction on travelers seeking to enter the United States from seven Muslim-majority countries; then U.S. District Judge James Robart in Washington state struck it down, prompting Trump to call Robart a “so-called judge” and said the nation should blame him if a terrorist sneaks into the country and does harm.

There’s more. The 9th Circuit Court of Appeals is hearing the Trump administration’s appeal and the three-judge panel that heard the case is sounding skeptical of the president’s order.

The plot thickens. If the 9th Court rejects the appeal, then it goes to the U.S. Supreme Court, which at the moment stands at eight members. Suppose, then, that the high court deadlocks — with the four conservative justices voting in favor of the ban and the five liberals oppose it. The lower-court ruling stands.

There’s some chatter now about whether the Supreme Court will be affected in some manner by the untoward things the president has said about the federal judiciary.

Has Trump crossed a serious line? Some scholars believe the president’s Twitter tirades against Robart in particular and the federal bench in general crosses the separation of powers line between the judicial and executive branches of government.

Get a load of this from The Hill:

“The criticism extends beyond judicial scholars.

“Rep. Mark Sanford (R-S.C.) warned that Trump’s attacks, if they continue, threaten not only to undermine the separation of powers but also the president’s own policy agenda.

“’We’re a nation of laws and not men, and this idea of ‘follow me because I say so’ is completely at odds with the Founding Fathers’ intent,’ said Sanford, a Trump supporter who has also criticized the president on certain issues.

“’I learned a long time ago in politics [that] attacking the person or the group that will decide your fate on a given issue generally doesn’t work out that well,’ he added.”

This is yet another matter of governance that the brand new president just doesn’t seem to understand. 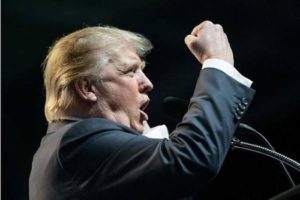 Let me see a show of hands: Has anyone out there ever seen or heard a president of the United States attack individual members of the federal judiciary?

I didn’t think so. Me neither.

A judge in western Washington state, James Robart, has stopped the president’s ban on refugees from certain countries. The Department of Justice is seeking an injunction against Robart’s ruling. That’s all normal reaction.

What is quite abnormal has been the president’s Twitter tantrum, calling Robart a “so-called judge” and saying if “anything happens” because a criminal sneaked into the country, we should blame the judiciary for it.

You’ll recall how as a candidate for president, Trump took on U.S. District Judge Gonzalo Curiel because of his Mexican heritage. Curiel is presiding over a case involving Trump University. Trump said the judge couldn’t adjudicate the matter fairly because “he’s a Mexican, OK?” Actually, the Indiana-born jurist is as American as Trump.

Trump as a candidate behaved disgracefully. Now that he’s president, he is expected to conduct himself with dignity and decorum. He isn’t. Trump continues to launch into these Twitter-borne tirades against a duly appointed federal judge.

Indeed, it is reasonable to question whether the president is trying to coerce another member of a co-equal branch of government into doing his bidding.

I believe such activity — if it’s ever alleged — would be illegal. As in against the very laws the president took a solemn oath to defend and protect. 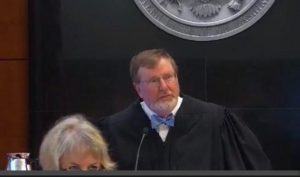 The president has called Robart a “so-called judge” because he had the nerve to halt the president’s ban on refugees entering the United States from Muslim-majority countries.

If I might be so brazen, my inclination is to wonder aloud — given Trump’s love of Twitter as his primary attack medium — whether he could be labeled a “so-called president.”

There’s not a damn thing “so-called” about Robart, who was appointed to the federal bench in western Washington state by President George W. Bush.

According to NBC News: “He (Robart) suggested in court that Trump’s 90-day entry ban on people from the countries of Iraq, Syria, Iran, Libya, Somalia, Sudan and Yemen was not ‘rationally based,’ since no one from any those countries had been arrested in the U.S. on terrorism-related charges since 9/11.”

There’s more: “‘I’m sorry, there’s no other way to put it,’ Robarts said from the bench. ‘It’s Keystone Cops. It really is. And that’s not just me speaking, that’s Republican members of Congress.'”

The president doesn’t like being criticized by anyone. Not by the media, or political foes or by judges who disagree with his decisions. His mode of response? Twitter! He tweeted: “The opinion of this so-called judge, which essentially takes law-enforcement away from our country, is ridiculous and will be overturned!”

Judge Robart is doing what he believes his oath requires him to do, which is to interpret federal law to see if it squares against the U.S. Constitution.

Robart is a Seattle native, he received his undergraduate degree in Walla Walla, Wash., got his law degree at Georgetown and practice law in Seattle from 1973 until 2004, when President Bush tapped for him for the federal bench; the Senate approved his nomination.

There’s nothing “so-called” about this fellow, Mr. President.

Pipe down and let the system play out.