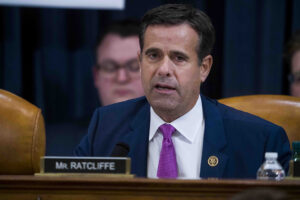 Donald John Trump wanted to nominate John Ratcliffe to be director of national intelligence this past summer.

Then questions surfaced about the U.S. representative from East Texas’ credentials. It was alleged that he fudged on ’em. He wasn’t nearly as qualified to lead the spook network as he claimed to be.

Senate Republicans joined their Democratic colleagues in questioning the wisdom of this selection. Ratcliffe withdrew his name.

But wait! Here he is again! Trump has renominated him to be DNI.

What happened? Has he built any additional credibility or credential to be the nation’s leading spy?

No. He hasn’t! All he’s done is defend Donald Trump ferociously during the House impeachment inquiry that resulted in Trump being impeached for abuse of power and obstruction of Congress.

Ratcliffe represents a congressional district that is thought to be as reliably Republican as any in the nation. He is on the ballot this fall. The GOP primary occurs on Super Tuesday next week. He once was a U.S attorney, but his prosecutorial experience is extremely limited, having little to do with matters involving national intelligence.

I am left to wonder what in the world the president is doing with this nutty appointment. He selected a U.S. ambassador to Germany as temporary DNI with zero credibility; he fired Joseph Maguire because the former acting DNI contradicted Trump’s national security assessment.

Now we get another Trump toadie to provide unvarnished intelligence? What the heck is that all about? Trump wouldn’t listen to the unfettered truth if it slapped him in the puss!

I do not feel any safer. Do you? 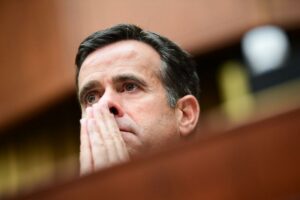 Donald Trump’s decision to nominate John Ratcliffe as the country’s next Director of National Intelligence reveals a frightening, outrageous aspect of how the president wants to run our national security network … as if we didn’t see this already.

Ratcliffe is a congressman from Northeast Texas, representing a district once represented by the late, great Sam Rayburn. Ratcliffe would succeed Dan Coats as DNI and would be charged — according to the playbook — with providing the president unvarnished analysis of the threats to the nation’s security.

Ratcliffe is not wired that way. Coats has done it, as have many of the preceding DNIs who have held the office.

Trump wants a “loyalist,” someone who likely adheres to his own idiotic view that the Russian hack of our 2016 election is a “hoax” cooked up by the “fake news” and Democratic opponents.

Rep. Ratcliffe showed his partisan stripes while questioning former special counsel Robert Mueller this past week. He challenged Mueller’s probe into the Russian electoral attack. As some commentators have noted, Ratcliffe appeared to be auditioning for the nomination once it became known that DNI Coats would be “stepping down.”

For the ever-lovin’ life of me I cannot grasp how this president continues to lie, deceive and flim-flam his way through the duties to which he has been charged. Even more astonishing is how he manages to cling to that 38 to 40 percent core of Americans who insist he is “telling it like it is” and speaks for them.

John Ratcliffe comes from that fervent base of Trump supporters. The nation does not need a Trump lackey in the post of DNI, which requires someone who is unafraid to tell the president the hard truth about the existential threats that put this country in danger.

If the president has a vast reservoir of talent waiting for the call to come to work in the White House — which he boasts of having — he can do a lot better than John Ratcliffe as head of the nation’s intelligence apparatus.

My fear, though, is that he doesn’t care about quality. It’s all about political loyalty.