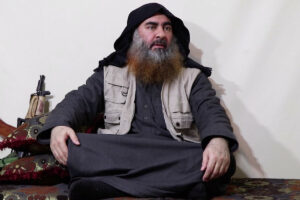 Abu Bakr al-Baghdadi’s death overnight in northwestern Syria at the hands of U.S. Army Delta Force and CIA commandos is a gigantic blow to the Islamic State terrorist organization he led.

But forgive me for emphasizing what ought to be the obvious: ISIS will remain a serious threat for as long as there are young men and women willing to buy into the terrorists’ religious perversion.

Donald Trump this morning confirmed what had been reported during the night, that special forces conducted a raid that killed Baghdadi. The commander in chief had authorized the raid after hearing extensive briefings from military and intelligence analysts that they had located the terrorist monster hiding underground near the Syria-Turkey border.

One cannot possibly overstate the importance of killing Baghdadi, just as the death of al-Qaeda mastermind Osama bin Laden in May 2011 was a huge blow to that terrorist organization. Let us take stock in the fact that just as al-Qaeda was able to reconstitute its leadership after bin Laden’s death at the hands of a Navy SEAL team in Pakistan, so will ISIS likely be able to do the same thing.

I believe it is important, too, to salute the meticulous work done by our intelligence forces in tracking Baghdadi down and enabling our special forces to find him, hunt him down and deliver ultimate justice to him. The president, infamously I should add, has been critical of some aspects of the intelligence community’s work in certain areas … relating, for example, to the Russian interference in our election.

They did their job with great skill and professionalism, which we all know they are capable of doing.

As for the special forces team that completed this highly dangerous mission, their capabilities are unmatched all of the world’s military history.

All that said, the fight against ISIS, al-Qaeda and all other terrorists who declared war on the United States on 9/11 must go on.

Abu Bakr al-Baghdadi is dead. May he rot in hell.

Donald John “Potty Mouth” Trump Sr. has sent a letter to African leaders proclaiming his immense respect for the nations of that continent.

He “deeply respects” the people of Africa. Do you believe him? Uhh, neither do I.

The president infamously wondered out loud about why the nation accepts immigrants from “sh**hole countries” in Africa, as well as from Haiti and El Salvador. It produced a serious firestorm. There have been denials from Trump himself, the White House, some Trump friends who were in the meeting. Oh, but others in the room have affirmed he said it.

Trump then writes a letter declaring his yuuuge respect for African nations.

Mr. President, save your chickensh** letters that seek to do nothing more than cover your own backside.

The man seemingly does not possess the capacity for sincerity, except when it involves self-aggrandizement.