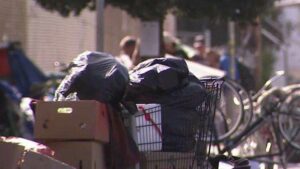 Donald Trump must have been kidding when he issued that Christmas statement calling on Americans to treat each other with “respect” and “understanding.”

That’s all I can think when I read the Twitter rant he fired off about California and New York’s homeless problems and how the governors of those states should ask the federal government “politely” for help in dealing with the problem.

Trump said this, for instance: “If their governors can’t handle the situation, which they should be able to do very easily, they must call and ‘politely’ ask for help. Would be so easy with competence.”

He called Govs. Andrew Cuomo of New York and Gavin Newsom of California “incompetent.” He said the homeless populations in both states are setting records. The president implied that the feds won’t lift a finger unless the governors show some manners in seeking help.

I don’t mean to suggest that I actually took Trump’s Christmas message all that seriously. He doesn’t exhibit any semblance of sincerity when he makes such proclamations. How can anyone believe he means those words when the first lady’s “Be Best” campaign against bullying ignores the president’s incessant bullying via his Twitter account?

He’s doing it again and again, this time aiming his ire at the governors of two of our United States.

I should point out that homelessness is not unique to those two states. Texas also has a big-time homeless problem. The difference? Texas is governed by a Republican; New York and California are governed by Democrats. Therefore, Democratic governors become fair game while Republican governors are protected by their party affiliation.

Perhaps we should just implore the president to dispense with the shallow holiday messages about “respect” and “understanding.” He doesn’t mean what he says, so … why bother? 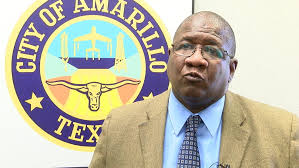 He also happens to be a politician of some renown in Amarillo, having served for years on the Amarillo Independent School District board of trustees.

Until recently, Allen served the city as its Community Development administrator. Then he quit. His resignation also comes in the midst of the city’s debate and discussion over how it handles its homeless population, an issue that involves Allen’s former office directly.

The Amarillo Globe-News has called correctly for a more fulsome explanation from the city as to why Allen quit, citing the public’s need to know why one of the city’s more high-profile administrators has walked off the job.

For that matter, you could make the same request of Allen himself. He hasn’t been forthcoming as to his reason for quitting, or whether he was asked to resign.

Allen has been involved in some high-profile matters involving the Amarillo ISD, namely the “changing” (if you want to call it that) the name of Robert E. Lee Elementary School to, um, Lee Elementary School. More recently, Allen has led the board toward a discussion of how it can change its district-wide voting plan to a single-member district plan to ensure more minority representation on the AISD board of trustees.

He is not exactly disappearing from public view.

However, James Allen has departed a municipal administrative post with no explanation yet to the people who foot City Hall’s bill as to why he has resigned. 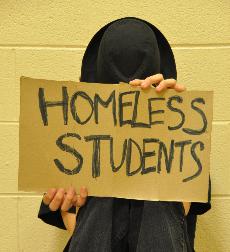 Here’s a number for you to roll around for a moment.

What does it represent? It’s the number of homeless students enrolled in the Amarillo Independent School District.

It came to the fore today during a lunch meeting of the Rotary Club of Amarillo. Kimber Thompson, who works with homeless students for AISD, delivered the figure today during the lunch program. I didn’t poll everyone in the room, but my sense is that it caught most of Rotary Club members by surprise.

Here’s a little more perspective and context for you to ponder.

AISD enrolls about 30,000 students at all grades, which means that a little less than 10 percent of its students are considered “homeless.”

I’ve got one more to thing to think about, and this comes from Thompson.

Amarillo’s student homeless population is the fifth-largest of any school district in the state. That’s not a per capita figure, according to Thompson in response to a question from one of the Rotary Club members. The number represents a raw number of total students.

Why am I writing about this? It seems to me that we have been handed a fascinating campaign issue for the city’s council candidates and those who are running for the AISD Board of Trustees to discuss as they campaign for votes.

Is there a joint solution to be found here to deal with this problem? Must there be such a large number of students who are considered homeless?

Thompson took time today to explain how AISD determines a student’s homeless status. Children might actually live in their family vehicle; or they might be camping out somewhere in tents; or they might be sharing a house with other extended family members or with friends; they might belong to families in transition.

They all qualify as “homeless.”

Thompson said AISD doesn’t want to transfer students from school to school, as so many homeless students have been shuttled between and among schools too often already. Such rapid and frequent change disrupts them emotionally, not to mention impairs the lessons they are supposed to be learning in the classroom.

I’ll acknowledge that before today I had no idea of the number of homeless students in the Panhandle’s largest public school district.

It was a stunning revelation, one that in my view is tailor-made for some candidates running for municipal and school district public offices to offer some recommendations — if not outright solutions.

Amarillo, I believe we have a crisis on our hands. And we need to talk about it openly — and with extreme candor. 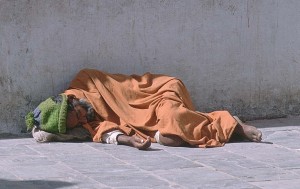 An earlier post on High Plains Blogger prompted a good buddy of mine to send me a link to a story published a year ago on how another city decided to deal with homelessness.

The mayor of Medicine Hat, a self-proclaimed “fiscal conservative,” Ted Clugston, decided the city should provide homes for every homeless person within 10 days of their learning they were without a home.

The blog I posted earlier commented on the Amarillo City Council’s decision to table an ordinance that regulates where homeless people can sleep.

Is it possible for Amarillo — with its population of nearly 200,000 residents — to embark on an ambitious plan to end homelessness?

It seems impossible for a couple of reasons.

One is that Amarillo is home to a major interstate highway interchange. I-27 ends at I-40. It’s the east-west highway — I-40 — that brings a lot of transient traffic through the city. Are these folks “homeless” Amarillo residents? Well, no. They are passing through.

How many of them are there? I haven’t a clue, but there would seem to be a fairly greater number of them than the folks who live in Medicine Hat.

The Canadian city also sits astride a major highway, Canada’s Highway 1. So perhaps that city gets a fair amount of pass-through transient traffic as well.

I think the second reason a homeless eradication program seems unrealistic for Amarillo is that, to be candid, I don’t sense the political will here to provide housing for every homeless person.

According to the Huffington Post: “If you can get somebody off the street, it saves the emergency room visits, it saves the police, it saves the justice system — and so when you add up all those extra costs … you can buy a lot of housing for that amount of money,” Clugston told the (CBC) network.

He initially resisted the idea of finding housing for those who need it. Then he changed his mind.

Would we really commit to such an ambitious and proactive project? Do we have the civic and political leadership to lead such an effort?

My gut tells me “no.” I could be persuaded otherwise.