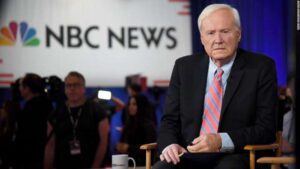 Now that I have caught my breath — more or less — I want to say a word or two about a stunning announcement that hit me like a slap in the chops as I waited to hear from one of my favorite TV commentators.

Chris Matthews instead came on the air and said he was leaving a show I’ve been watching for the past two decades. That would be “Hardball.”

Well, my first reaction was: What in the name of unwelcomed surprises was that all about ? It turns out that Matthews and his MSNBC bosses thought they should part company over some on-air and off-air missteps.

Tonight the host apologized for saying something complimentary about a woman’s appearance, which someone must have thought was inappropriate. He earlier apologized correctly for invoking a Nazi Holocaust reference to Bernie Sanders’ stunning Nevada caucus victory.

He spoke of the many fans of his who have enjoyed watching his commentary on the air. I am one of them. I long have gotten much about this man’s snappy, staccato rhetoric that he delivered at times over the voices of his guests. Still, this guy always has something interesting to say and he says it in a sort of regular-guy sort of manner that I find so amazingly appealing.

Matthews is no stranger to politics. He wrote speeches for President Carter, worked as an aide to House Speaker Tip O’Neill. He’s been at the center of power for decades. He has reported on the center of power as a reporter and columnist for the San Francisco Examiner.

The man’s knowledge is obvious. His love of politics and his belief in politics as a noble profession is equally so.

I am going to miss Chris Matthews’ perspective, which he delivered to us nightly with courage and ferocity. 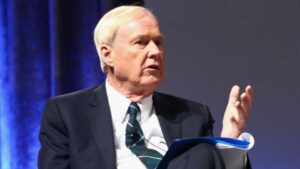 Chris Matthews has stepped in it. Big time.

The MSNBC “Hardball” host is taking intense social media fire over a remark he made over the weekend in which he likened Sen. Bernie Sanders’ big win in the Nevada caucus to the Nazi invasion and conquest of France during World War II.

One serious problem has emerged immediately after Matthews shot off his loud and boisterous mouth. Sanders, who is Jewish, lost many of his family members during the Holocaust.

Social media have gone berserk. Viewers are calling for Matthews, a veteran newspaper columnist, a former congressional aide and a longtime cable TV broadcast personality, to resign. Short of resignation, social media critics are calling on MSBNC to fire Matthews for his display of extreme insensitivity.

Here’s what I think ought to happen.

Chris Matthews needs to go on the air and issue an apology. And I don’t mean one of those phony “If I offended anyone” non-apologies. He needs to say something like this: “I made a terrible mistake. I am sorry for what I said. I engaged my motor mouth without turning on my sensitivity filter. I blew it and I apologize to everyone who heard me make that hideous comparison on the air.”

If the apology doesn’t stem the criticism, then he should quit. My hope would be that a full-throated, sincere apology might do the job.

What’s more, Matthews — who is known for his machine-gun delivery — needs to re-calibrate the manner in which he delivers his commentary. 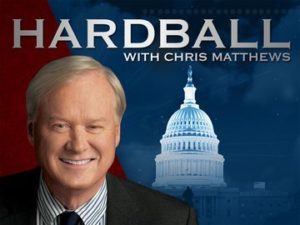 Chris Matthews is a loud, sometimes-abrasive TV commentator who opines for MSNBC.

He often, though, has learned guests on his nightly cable TV talk show “Hardball,” in which individuals are invited to make their cases with knowledge and a healthy dose of respect for others’ points of view.

I now will let the video speak — or scream — for itself.

My head is spinning over the past day or two regarding revelations about Dr. Ben Carson’s alleged, purported, supposed misstatements about whether he got a scholarship offer to West Point.

It’s turning into a game of semantics.

Moreover, the arguments have turned the discussion into a mud bath, meaning it’s becoming “clear as mud” about what Carson — a leading Republican presidential candidate — wrote about himself and whether it comports to the truth about what actually happened and when it supposedly occurred.

Steve Kornacki is a smart young political analyst who’s a regular on MSBNC’s talk-show circuit. He hosts a weekend talk show on MSNBC called “Up with Steve Kornacki.”

I’m beginning to believe that Kornacki might have the right take on how this Carson imbroglio is going end up. He said the other night on “Hardball,” another MSNBC show, that Carson and his allies have managed to turn the tables on the so-called “liberal mainstream media,” and have turned the argument into a game of “gotcha” in which the “liberal press” is “out to get” the good doctor.

Thus, if I read Kornacki’s analysis correctly, they’ve built enough reasonable doubt over the original story published by Politico that they’ve managed to deflect the argument back to the messenger … the aforementioned “liberal mainstream media.”

To be plainly honest, the story has taken so many turns I’m having trouble keeping up with it all. I need to stay focused entirely on the saga — chapter by chapter — to make sense of it all.

I guess I’ve boiled it down to simply this point: Dr. Carson could have written any reference to West Point with much more clarity than he apparently has done so far.

Or … he could have just not mentioned West Point at all.

I suppose another presidential candidate, Sen. Bernie Sanders of Vermont — who’s seeking the Democratic nomination — had the best take on it all: Maybe we ought turn our focus more on Dr. Carson’s peculiar current public policy views and less on what he has said about his past.

What in the world is the State Department thinking?

State Department spokeswoman Marie Harf told Chris Matthews on MSBNC’s “Hardball” talk show that the United States cannot win the war against the Islamic State by killing them, that we need to help them find jobs.

Here’s how FoxNews.com reported it: “‘We’re killing a lot of them, and we’re going to keep killing more of them. … But we cannot win this war by killing them,’ department spokeswoman Marie Harf said on MSNBC’s “Hardball.” “We need … to go after the root causes that leads people to join these groups, whether it’s lack of opportunity for jobs, whether –‘

I’m not going to buy the notion that some critics of the Obama administration say about the president going soft on terrorists.

This idea that we need to focus on job creation while waging war against these monsters is nuts in the extreme.

Harf did add that there’s “no easy solution.” She said American military operations would continue to kill ISIL leaders. But she said, “If we can help countries work at the root causes of this — what makes these 17-year-old kids pick up an AK-47 instead of trying to start a business?”

How about, Ms. Harf, we soft-pedal the job creation and push the pedal to the metal on our efforts at killing the bad guys?

War is a supremely unpleasant endeavor, but we’d better continue fighting it as if we intend to win it.