I am not generally inclined to speak well of Kellyanne “Alternative Facts” Conway.

However, I want to extend sincere good wishes to her as she steps away from the White House, from politics, and from Donald J. Trump’s chaos to tend to family needs.

I have been watching and listening to Conway try to defend Donald Trump’s policy lunacy over the course of the past four years. I also have been listening with considerable interest the rants of her husband, high-powered lawyer George Conway, who co-founded the anti-Trump Lincoln Project. I long have wondered: How do these two individuals manage to stay married, given the vast political differences that they air almost daily. I know that their marriage is no one’s business, but they both have been heavily involved in public affairs over the years, so their status as public figures opens up aspects of their lives that they otherwise might prefer to keep private.

It is not being reported heavily with the news that Kellyanne Conway is stepping away from her policy role at the White House and George Conway from the Lincoln Project that they are seeking to mend their marriage and tend to their children’s needs. Indeed, their teenaged daughter Claudia said recently she is seeking “emancipation” from her parents. As National Public Radio reported: In a series of tweets that followed, she said that her mother’s job had “ruined my life” and that she and her father “agree on absolutely nothing,” politically.

As the 2012 Republican presidential nominee Mitt Romney once noted, “There is more to life than politics.”

I wish the Conways well. 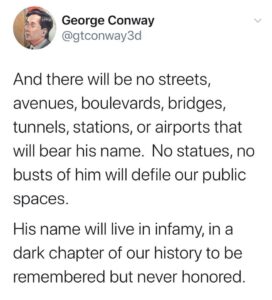 What you see attached to this brief blog post is a Twitter message attributed to George Conway.

In case you don’t know who he is, Conway is married to Kellyanne Conway, one of Donald Trump’s most trusted senior policy advisers.

George Conway is a high-powered, hard-hitting Washington lawyer, a noted conservative and someone who I guess you could describe as a “Never Trumper.” George Conway has been savaging Donald Trump almost daily since the POTUS took office in 2017.

To be candid, the thoughts expressed in this message mirror precisely the kind of feelings I have been harboring for, oh, ever since Trump became a politician.

I am not going to declare categorically that this came from George Conway. I merely want to endorse the message it delivers.

Donald Trump will be “remembered but never honored.” 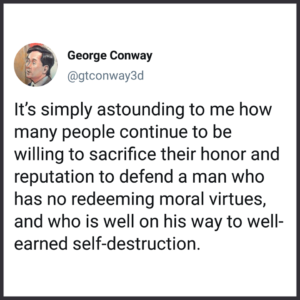 Oh, to be a fly on the wall in George and Kellyanne Conway’s dining room.

George Conway is a noted lawyer and a vocal critic of Donald J. Trump. Kellyanne Conway is the former Trump 2016 campaign manager who now serves as a senior policy adviser to the president of the United States.

Trump is in the midst of a fight over whether he should be impeached in connection with allegations that he sought a political favor from a foreign government, an action that U.S. House Speaker Nancy Pelosi now refers to as “bribery.”

As I watch this impeachment inquiry proceed, I am struck by the same question that George Conway has posted in this Twitter message. Many of Trump’s defenders are — in other contexts — honorable men and women who are going to the mat for a man who does not share their basic values of decency and morality. I know a number of individuals for whom I harbor personal affection even though they continue to stand with this president.

I am baffled and amazed at the level to which so many of these individuals continue to “defend” this guy. I want to qualify the word “defend,” because what we hear from these Trump allies doesn’t constitute a defense of Trump’s character, his own morality or his own values. Their “defense” has been a full frontal assault on the motives of Trump’s accusers and the process by which they are bringing their complaints.

We watched much of that strategy play out during the first round of public hearings in the House impeachment inquiry earlier this week. It is a sorry continuation of what has been done ever since former Attorney General Jeff Sessions recused himself from the Russia investigation and the Justice Department hired Robert Mueller III to become the special counsel who would examine whether Trump’s campaign “colluded” with Russians who attacked our electoral system.

George Conway speaks for many millions of Americans — such as me — who cannot fathom the extent to which otherwise straitlaced Americans keep casting their lot with the charlatan masquerading as president of the United States. 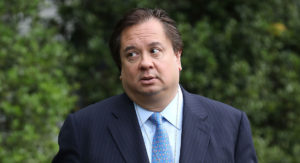 Do I have this straight?

George Conway is the noted lawyer who has emerged as a vociferous critic of the president. His wife is defending the president, interestingly; she’s been quiet about the insults Trump hurls at her better half. Weird, yes? Yeah, I think so.

But how does someone who doesn’t “know” an individual call him a “wack job”?

Hey, I am inclined to believe Donald Trump knows George Conway far more than he is letting on. Don’t you think the president is lying yet again?

Let me see if I can keep this straight.

George Conway is married to Kellyanne Conway. George is a harsh critic of Donald Trump, for whom Kellyanne works in the White House as a senior policy adviser.

George Conway has launched a Twitter attack on the president, calling into question his mental fitness for the job to which he was elected.

Donald Trump fires back at George Conway, calling him a “total loser.”

The question: How in the world, presuming that Kellyanne loves George, does she remain employed by the White House, working for someone who denigrates her husband?